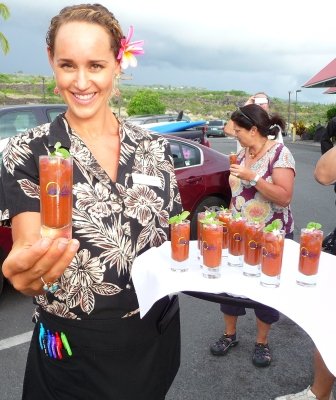 We, and fellow International Food Wine & Travel Writers, arrived in the parking lot of Sam Choy’s Kai Lanai restaurant on the Big Island of Hawaii to be served poké shooters. Quite an introduction to Sam and his Hawaiian hospitality. 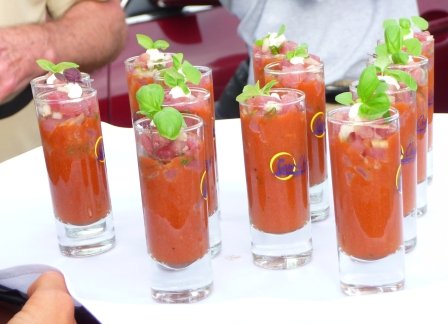 Sam Choy is the quintessential chef-restaurateur, proud of the cuisine of his Hawaiian heritage, always smiling, eyes bright, giving constant attention to his customers’ comfort. Knowing instinctively how to impress. 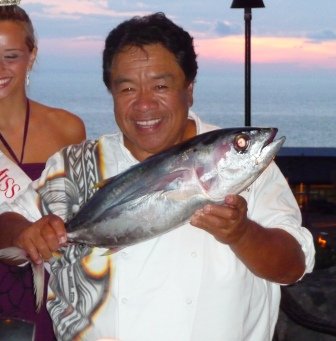 Sam prepared our poké appetizer with a freshly caught tuna. With the sun setting behind him, he caressed the fish before beginning to fillet it, moving his hands gently over the body, lifting the fins. “Let the weight of the fish tell you where to cut,” he said. “Feel the oils. The oilier the fish is, the better it is.” 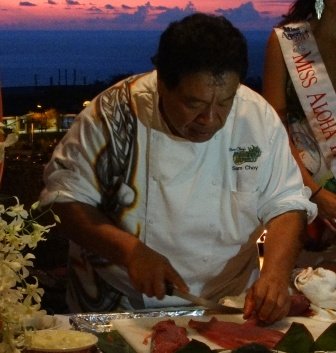 Poké means cut into small cubes. It can be fish, prime rib, tomatoes, tofu, or mangoes. In Sam’s case, it is any fresh, raw, saltwater fish. His traditional recipe for poké is made with perfect 1” cubes of raw fish tossed with sea salad (seaweed) and sea salt. Sam explained that after the arrival of Captain Cook to the Hawaiian islands, hot peppers, sweet onions, green scallions, soy sauce, and sesame seed oil were added to the mix. He prepared both versions for us. 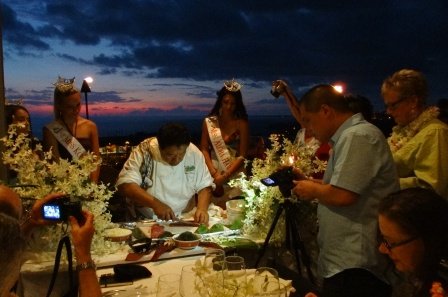 Because Hawaiian farmers are producing such good, locally grown, fresh products, Sam seizes every opportunity as a chef to be a mouthpiece for the farm to table movement that is bringing the isolated islands closer and closer to sustainability. “If we chefs, here on the islands, weren’t so far away from the rest of the world, we would be kicking butt,” he said as cameras flashed and smart phone screens lit up. 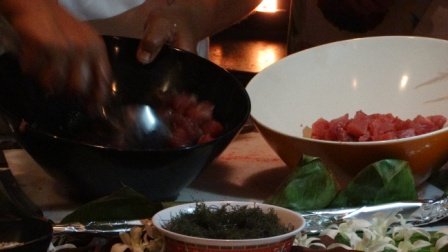 Tossed and served immediately, the aroma, gentle texture, and marinated flavor of Sam’s traditional version of poké exemplified earlier times in Hawaii, when life was simple, sweet, and brimming with natural produce. An Hawaii that Sam Choy and others are working hard to re-kindle. Mahalo from The Cooking Ladies, Sam.