A Fusion Of Outdoor Adventure & City Living in Oxnard, California 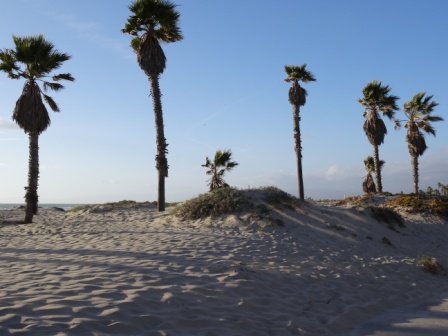 Oxnard, California, is the place for people who appreciate nature when it is in close proximity to city living. Immense beaches run for miles with pristine white sand and gentle desert-type dunes.

Fresh Pacific Ocean bounty and local farm produce is available on restaurant menus. Nearby Channel Islands National Park includes five off shore islands, each with distinctive character and exploration potential. In a joint project with National Parks, The Channel Islands National Marine Sanctuary protects those islands, where shipwrecks and artifacts remain in place, providing access for a range of outdoor activities. 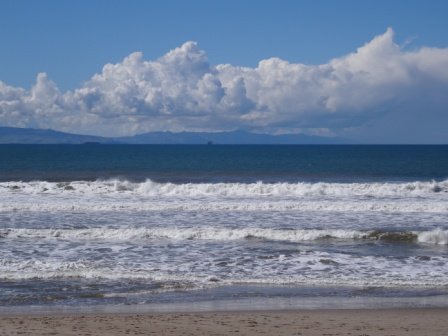 We parked the car, kicked off our shoes, and stepped onto the never-ending soft sand of Hollywood Beach. The roar of the waves built to a crescendo as we reached the lifeguard tower. Salt water and wet sand massaged our feet at the water’s edge. The Channel Islands rose in the distance beyond the pounding surf. Mountains arched into the blue sky to the north and the fertile farmland of the Oxnard Plain spread behind us to the east. 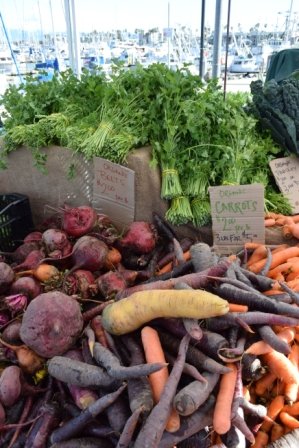 Seasonal vegetables at the market 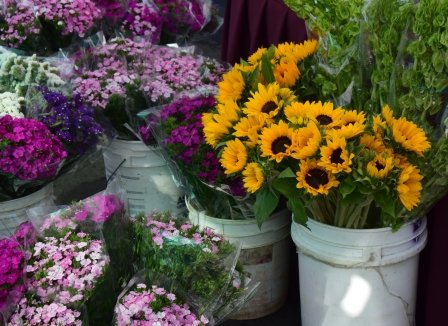 Cut flowers at the Farmers Market 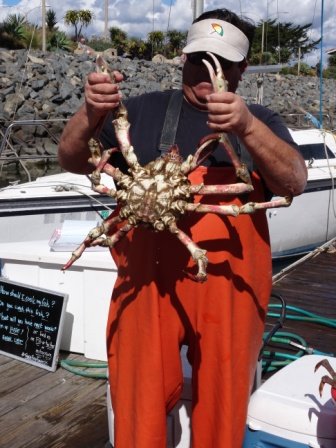 Fresh catch from the boat

Fishermen sell their catch right from their boats in the marina. Halibut, crab, shrimp, and bluefin tuna. 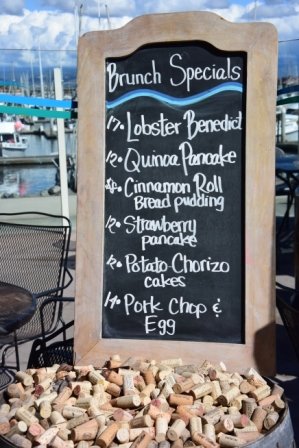 Chefs at the Waterside Restaurant & Wine Bar have the luxury of stepping out of the kitchen and into Channel Islands Harbor Farmers Market. We followed along as they chose blueberries, pears, and small bunches of fresh herbs for their Sunday brunch. 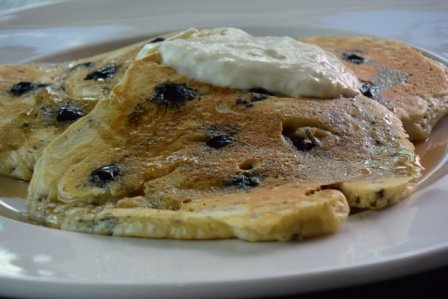 Later, we savored their selection, in the daily special, quinoa pancakes with blueberries and lemon curd. 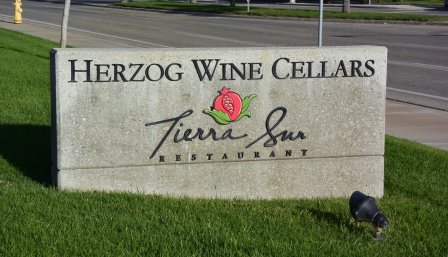 Oxnard is the home of Herzog Wine Cellars, a kosher winery, whose restaurant, Tierra Sur, also benefits by location in an area abundant with fruits de mer and farm produce. 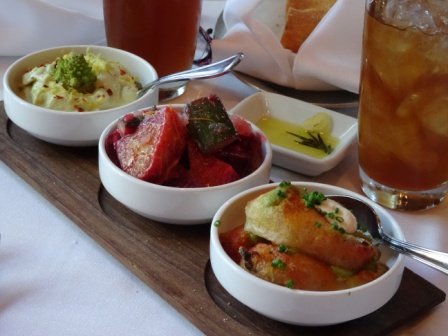 We began our lunch with a trio of Platillos or little plates, Cauliflower and Romesco Mash, Cucumber and Beet, and Chilli Rellenos stuffed with potato then continued with Tostada Estilo de Ensenada and Asian BBQ Brisket Sandwich. 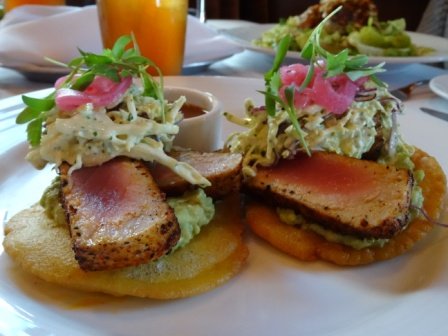 The appetizers, fish tacos, and brisket were extraordinarily photogenic, and flavorful. Not wanting to end the experience, for dessert we chose Zeppoli, cinnamon doughnuts with hot chocolate sauce.

The next day, Chef Neal Rosenthal of Channel Island Provisioners prepared and packaged our lunch for our day excursion to Santa Cruz, the largest of The Channel Islands. He locally sourced the ingredients for our choices: turkey flatbread with braised Swiss chard and onion jam, flourless chocolate cake with caramel sauce, and trail mix with dried bananas, pretzel pieces, raisins, craisins, dried cherries, almonds, cashews, and pastachios. 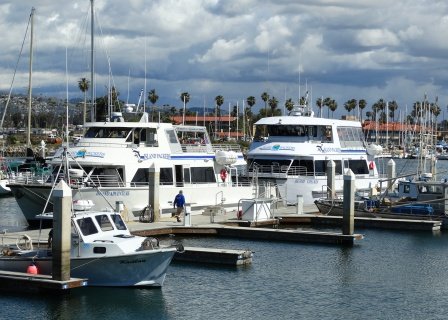 We nibbled on Chef Neal’s trail mix as we crossed the 20 miles of water from Ventura Harbor to Santa Cruz aboard Island Packers, the provider for passengers to The Channel Islands National Park. Island Packers is a family run business. 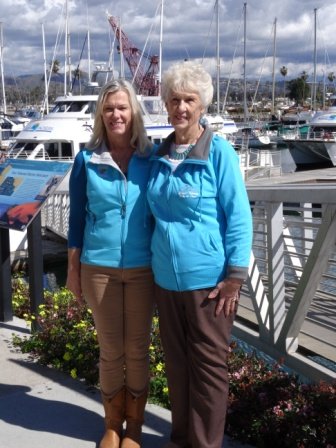 Before boarding we met Cherryl Connally and her mother, Lillian Mae, who started the business with her husband, Bill. By the time kayaks, backpacks, and appropriate gear for snorkeling, camping, wildlife watching, and beachcombing were loaded on board, and we had taken photos of sea lions sunning on the dock, we felt like family, too. 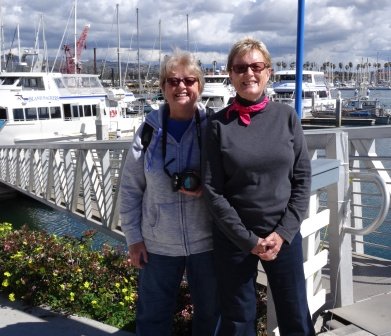 The Cooking Ladies all ready for a day of adventure

Captain Jimmy slowed the boat down when someone pointed to a pod of dolphins. Just a few days earlier he had stopped for a rare sighting of killer whales.

There was a sprinkling of rain as we climbed a ladder from the boat to the dock at Scorpion Anchorage, but typically, it did not last long. The Island Packers website is a good source of what to bring and how to prepare for a trip to the islands. For those few minutes in the rain, we were glad to have our rain gear with us. 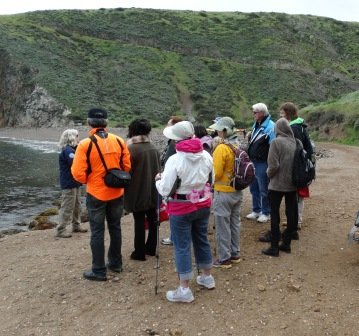 A volunteer with the National Parks and National Marine Sanctuary, was available to answer any questions as well as lead an hour-long hike for those who were interested. She reminded us that we were to be at the dock at departure time, the boat could not wait for stragglers. 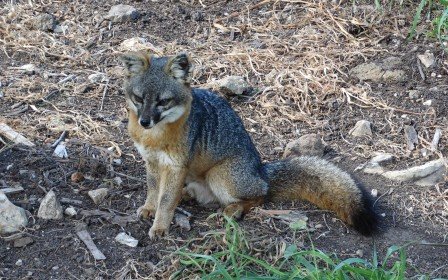 The island is home to the island scrub jay and island fox. Neither are found anywhere else in the world. 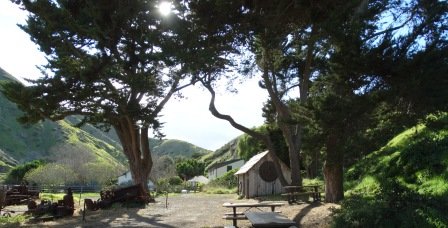 As we spread our lunch out on a picnic table, others set off in kayaks or investigated the historic ranch house at the Visitors Center. 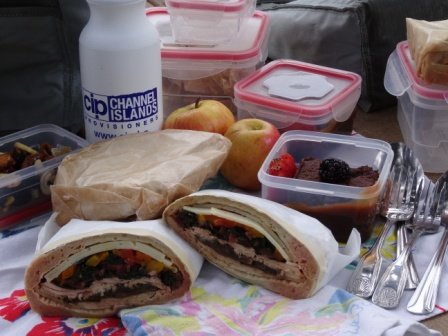 Picnic lunch on the island 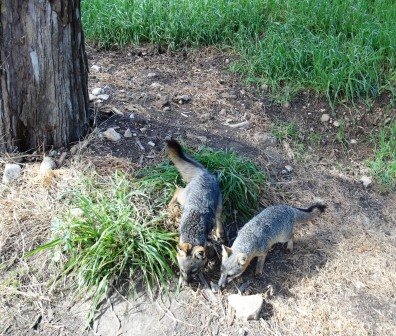 Visitors at the picnic table

Two small foxes, the size of domestic cats, appeared out of nowhere; their fur was sandy red and gray, their tails fluffy. They circled under the table and around our feet like puppies looking for scraps, soon wandering away because we did not feed them. Doing so would have contributed to the endangerment of their species.

There is a web of trails on Santa Cruz Island. We hiked to the camping area where passengers from the boat were setting up tents and storing their food supplies in secure animal-proof boxes. 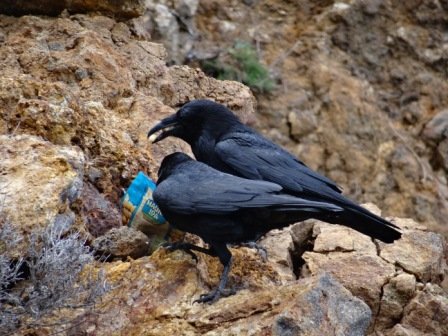 A weekend camper described how ravens had managed to unzip her backpack and steal her chapstick and matches. 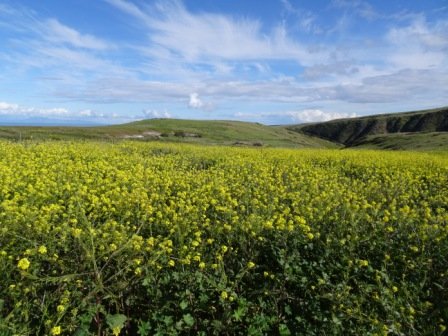 Beyond the campground, the Cavern Point trail climbed rocky terrain through wildflowers to panoramas of the Santa Barbara Channel. We breathed in the scent of hot sun on wild grasses, felt heat radiating from the rocks, heard white-tailed birds chirping. 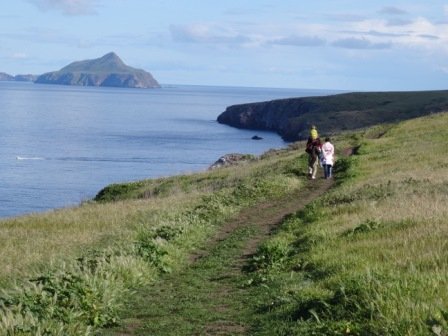 While we stood on a bluff, watching waves crashing on a beach far below, we promised ourselves that the next time we travel to Santa Cruz we would stay longer than a day. 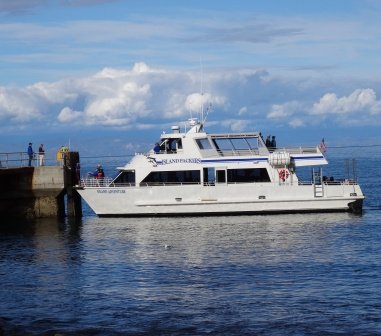 The Island Packers boat pulled up to the dock on time, and so did we. The majority of the passengers on the return trip lounged downstairs, near the galley that offered draft beer, wine, and microwaveable fast food.

Out on deck, the sun was close to setting as we slipped back into Ventura Harbor. With a quick phone call, we had reservations at a downtown restaurant.