Barbecue And Crawfish Boil In Cajunland 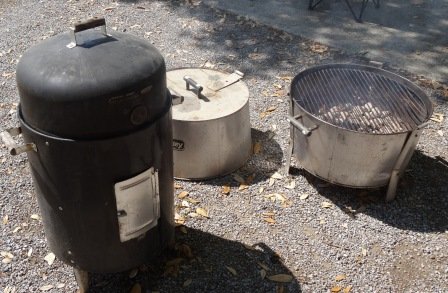 Barbecue and crawfish boil are part of a 39-year tradition of bringing the family together on Easter Sunday for the Benoit family. This year, we were their neighbors at the KOA in Scott, Louisiana. The youngest attendee was a year old; Lilly, the oldest, was 83. 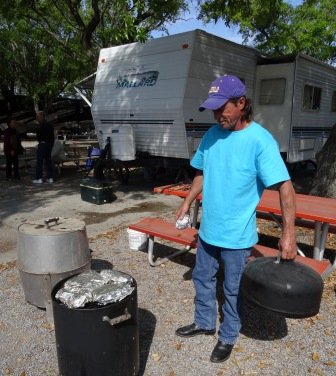 Sonny Benoit was the cook. Around 9 am, he set up two charcoal smokers. “I’ve been doing this all my life,” he said. Sonny wrapped sausage and ribs in aluminum foil and set them in the smokers.

“The foil keeps them tender. Just before eating, I take them out of the foil and set them on the smaller grill to crisp them up, like cracklins,” he said. 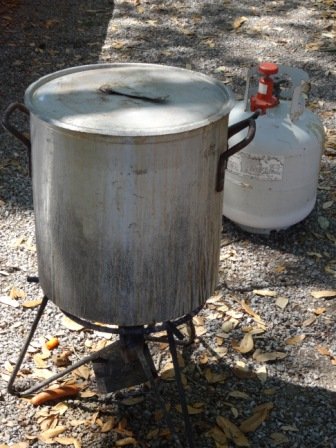 At ten o’clock Sonny set up a pot and burner for the crawfish boil and placed bottles of barbecue sauce and containers of seasoned salt on the picnic table. Someone changed the Cajun music on the radio to Tom Jones singing “She’s a lady.”

“I don’t understand all those people out on the highway on Easter Sunday,” Sonny said, motioning toward two RVs pulling out of the campground. “Why don’t they chill? Sit. Enjoy the day like we do every year.“ 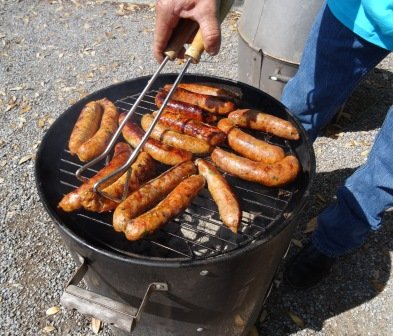 By 10:30, the sausages came out of the foil to brown on the grill. Some sausages browned faster than others. “Those are the ones with syrup in them. The others are chicken and pork.”

Sonny and his wife, Carolyn, insisted that we try the sausages. All three were good. The syrup sausage was a little spicy, a little sweet, with the added flavor that only comes with charcoal cooking. We loved it. 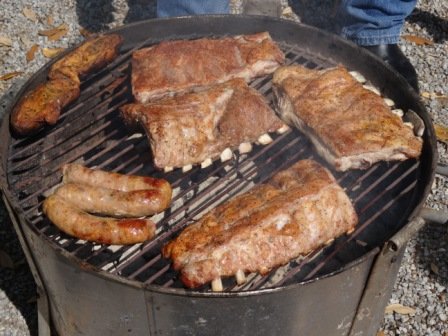 When the ribs reached the tender stage, Sonny removed them from the foil and placed them over the direct heat of the white ash-covered briquettes. As soon as they were browned and crispy on the surface, he cut the ribs right on the grill. No muss. No fuss. Ready to eat. Chicken pieces replaced the ribs in the smoker.

By 11:30 people were sitting in chairs under the shade of a big old tree, nibbling on sausage and ribs. The youngest member of the family got lots of attention. Teenagers wandered off with puppies on leashes. As more family members arrived, Sonny continued to cook more sausage as well as chicken quarters and pork chops. He kept busy tidying the picnic table, occasionally stopping to move with the music from the radio that was now playing the Beatles “Twist and Shout.”

Sonny added his grilled chicken and pork chops to the selection on the table then dropped potatoes, whole unpeeled onions, whole bulbs of garlic, corn cobs, and mushrooms into his huge pot of boiling water. People continued to wander, nibble, and visit. 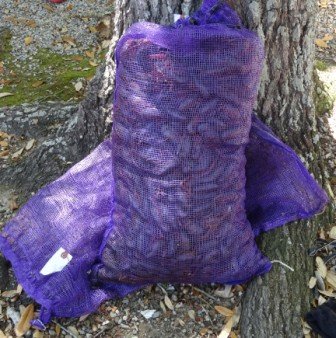 Purple mesh bags of squirming crawfish appeared near the steaming pot. “These were caught last night. Usually they’re bigger, but it’s been cold so the big ones hide deeper in the mud,” Sonny explained.

Sonny spread newspapers over the red and white tablecloth on the picnic table, lifted the steaming basket of corn and potatoes out of the hot water to drain, then dumped the mixed contents onto the newspaper. 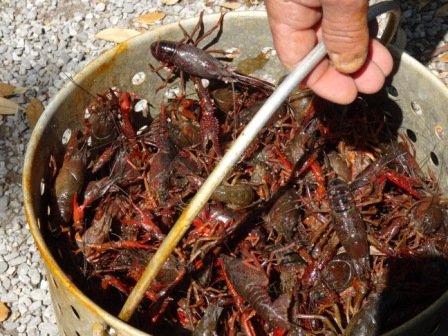 Very quickly, he filled the empty basket with hundreds of clamoring dark green-brown-orange crawfish and lowered it into the boiling vegetable-flavored water. He tossed in a handful of spices.

”It takes five minutes for the crawfish once the water is back to a boil. Any longer than that and …” Sonny said as he raised his hand to make a slicing motion across his throat. 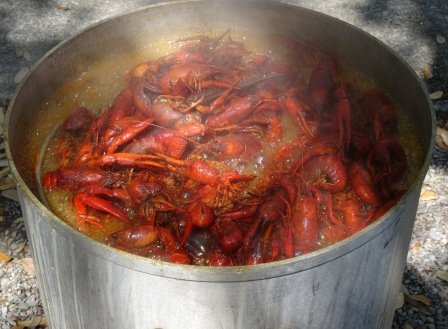 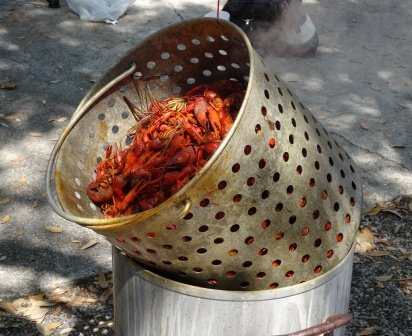 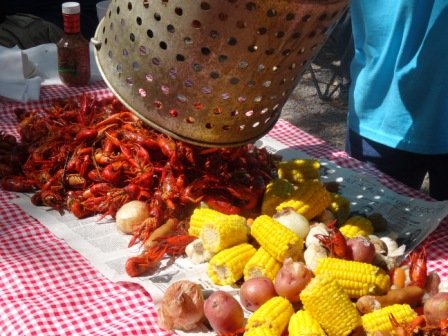 In precisely five minutes, Sonny lifted the basket, waited a moment while it drained, then tipped the now brilliant red, motionless crawfish onto the table beside the vegetables. Everyone gathered around to twist the tails off the hot crawfish, peel them, and eat. Some sucked juices from the cavities of the crawfish before discarding the shells and focusing on the delicate, bite-size tails. 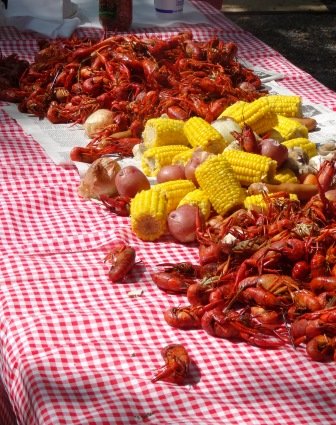 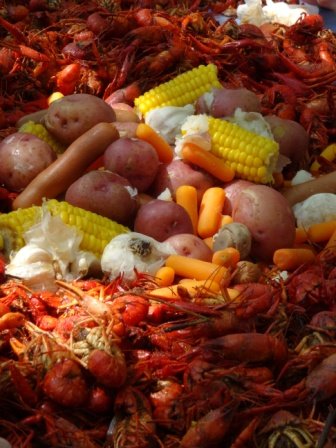 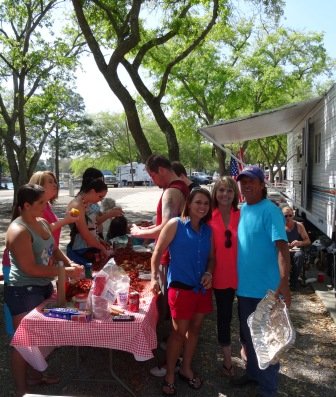 Sonny sprinkled seasoned salt all over the food on the table then turned to drop another batch of crawfish into the hot pot. Finally, he, too, got in on the action. Smoothly, deftly, he picked up a crawfish, twisted, sucked the juice, discarded the shells, chewed once, swallowed, and picked up another. And another.

Piles of discarded crawfish shells were whisked away into a garbage bag before the next batch hit the table. By the time the three sacks of crawfish were depleted, everyone scattered to relax. Sonny lifted the corners of the tablecloth, wrapped the cloth around the pile of scraps, rolled it into a ball, and took it away. 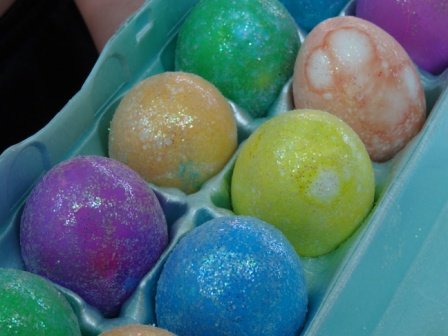 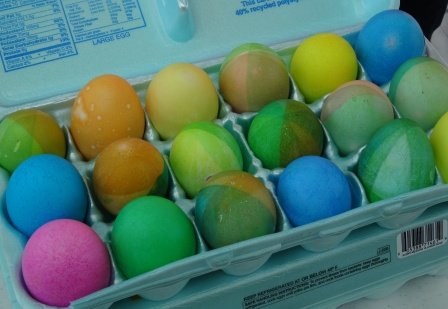 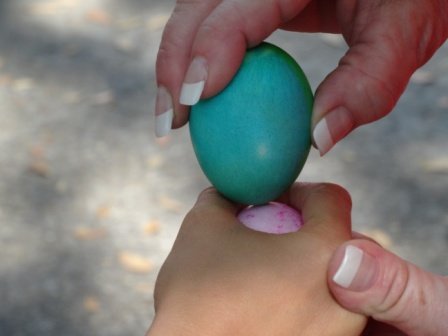 The day ended with desserts and an egg “pacqueing” or egg tapping contest. Dozens of Easter eggs were set out, each dozen uniquely decorated by individual members of the family. Contestants wrapped a hand around an egg with as little of the top of the egg showing as possible while someone else tapped the egg with the tip of their Easter egg. Whoever held the egg that did not break, won.

We asked Sonny whether we would see him again if we parked in the same spot at the Lafayette KOA next Easter.