Chatting With A Prime Minister in Charlottetown PEI 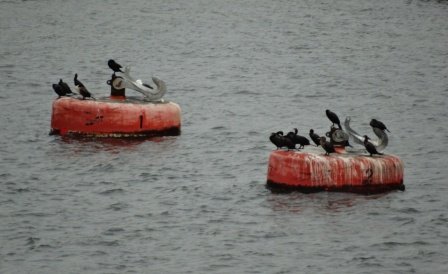 Prince Edward Island always beckons us back. This time we arrived by sea. Our annual International Food Wine and Travel Writers Association conference was held during a cruise from Boston to Montreal. Our fourth port of call was Charlottetown, the capital of PEI.

On previous trips to Canada’s smallest province, we captured the island’s rusty red soil, white churches, and lighthouses with our cameras. We caught a performance of Anne of Green Gables with every little girl in the audience wearing red pigtails, ate sea weed pie, felt right at home at a New Glasgow lobster supper with all the trimmings, and sampled local delicacies like cod cheeks, mussels, and Malpeque oysters.

As the cruise ship entered Port Charlotte we were excited about what new discoveries we would make this time, in the few hours available.

Birds on a buoy welcomed us into the harbor.

An 18,500 pound lobster beckoned us onto the lawn in front of Founders Hall, appropriately named for the group of politicians who met in Charlottetown in 1864 to convince PEI to join a union of Canadian provinces. Confederation did take place in 1867 but PEI was reluctant, not joining until 1873.

The Time Travel Tunnel in Founders Hall depicts the animated island debates on the pros and cons of confederation.

Walking up the street – to uptown

Old buildings in pastel colors lined the uneven sidewalks and narrow streets of our walk from the waterfront to uptown.

Along the way, we met, in statue form, two delegates to the 1864 conference. Though not related, they had the same name, John Hamilton Gray. Frozen in time, they stand mid-conversation just outside The Great George Hotel and across the street from St. Dunstan’s Basilica Church.

On a side street we found Elkhart the mouse, one of nine bronze statuettes set up as game for children to learn about Charlottetown’s heritage through a list of clues as to their locations.

The girl with the red pigtails

Banners promote Anne of Green Gables outside the Confederation Center of the Arts in the heart of uptown. The musical has been performed continuously since 1965. In March 2014, the show was officially recognized as the longest running annual musical theatre production in the world by Guinness World Records.

Chatting with Sir John A

The caliber of our statue experience rose as we recognized Sir John A. Macdonald, Canada’s first prime minister, sitting alone on a park bench on Queen Street.

With time to spare before re-boarding the cruise ship, we jumped in a taxi for a quick drive out of the city to one of our favorite spots, the French River, where a vista includes both water and farmland, the two hearts of the Prince Edward Island experience.

As we drove by beaches, fishing villages, and fields of potato plants loaded with white blossoms, our taxi driver was so animated with local stories that his hands were more often in the air than on the steering wheel.

More than a chip shop

We made two food stops on our stroll back to the ship. The first, at a fast food stand. We could not leave PEI without indulging in fresh cut fries.

Steamers Boathouse on the dock

The second, at Steamers Boathouse on the dock.

The last stop before sailing away

Within minutes we were right into lobster dinners and locally produced Beach Chair lager.

Later that night the cruise ship passed under the Confederation Bridge on the way out to sea. In 1997, the 8-mile long engineering achievement created a fixed link between Prince Edward Island and the rest of Canada. Just as in 1867, over the issue of confederation, the people of Prince Edward Island were reluctant to have the bridge built. They still were not sure about a permanent connection to the mainland. The decision was finally made with a 59.4% “yes” vote at the polls.

In our short time in Charlottetown we met a mouse that didn’t make us shriek, met two men with the same name, shared a park bench with a prime minister, and cruised under the Confederation Bridge rather than drive across it.

And, once more, we enjoyed the unique Prince Edward Island take on being a part of Canada.