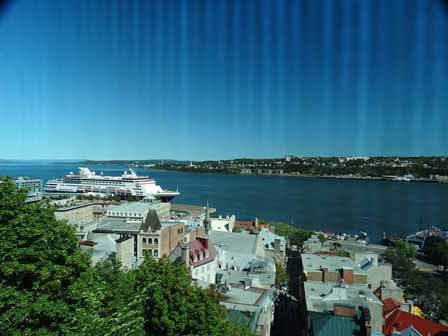 We arrived in Quebec City along the St. Laurence River, just as the French and British did prior to Canada becoming a country. Cruising the narrow stretch of the river with high bluffs, distant church spires and a small ferry crossing from one side to the other it was easy to understand how early settlers from 1608 to the 1800s would have appreciated the security of the location.

Quebec City stands on two levels, one at the hilly river’s edge and the other on the bluff above.

The only truly walled city north of Mexico is the cradle of French civilization in America. Old Quebec City was designated a UNESCO World Heritage Site in 1985.

We hiked cobblestoned streets to Place Royale, the site of Samuel de Champlain’s headquarters in 1608. It is a comfortable space with greenery-filled planters on ancient stone walls, multi-colored roofs, and the oldest church in North America, Notre-Dame-des-Victoires.

We strolled through a quiet, secluded area of the Old City to have lunch at Restaurant Initiale, 54 rue St. Pierre. Relais & Château, an association that sets the standards for excellence in hospitality and culinary arts, describes the restaurant’s fare as “fine food, typical Quebec with regional and local produce.” As we were greeted at the entrance, we immediately knew our déjeuner in Vieux Québec was going to be a good experience.

Green beans balance on the thinnest of grapefruit fillets.

Rolande runs the dining rooms with attention to detail. Our wine glasses were refreshed and fresh crusty bread was replenished without us ever noticing. Rolande is attentive to her customers, alert to anyone with special requests.

As we were leaving, Rolande shared personal gift baskets of locally-produced meringues.