Cuba – From The Straits Of Florida To The Streets Of Havana 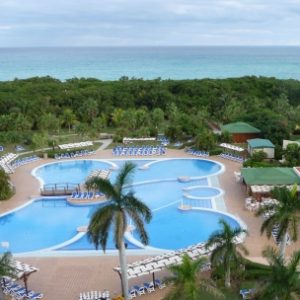 In November 2009, we flew from Canada to Cuba to stay for a week at a 5 star hotel on the beach in Varadero. Our ocean-view room looked out over the miles of rolling south-sea blue water of the Straits of Florida. Directly below, palm trees, swimming pools, cabanas, and matching white and blue deck chairs were picture perfect. 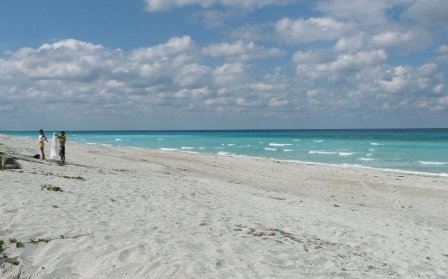 Beach at the hotel along the Straits of Florida

In advance of our trip, friends, and tour specialists provided tips. Remember to hold back CUC, convertible pesos, for taxes at the airport, on departure. Without them, you cannot get on the plane. Let your credit card company know you are traveling in Cuba, otherwise your card is likely to be declined. Be sure to pack ketchup and hot sauce, the food is bland. Take your suitcase full of lotions, toothpaste, aspirin, bandaids, nylons. Use them to tip room service, because none of those things, that we take for granted, are available to Cubans.

We also received a warning. People are friendly and hospitable. If a hotel employee invites you home, it should be safe. If someone on the street does, maybe not. 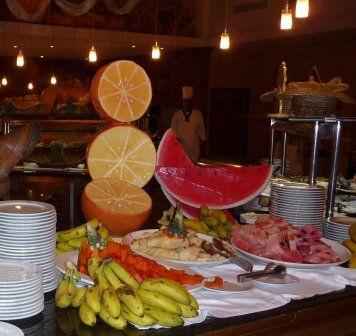 Colorful buffets at our hotel in Varadero 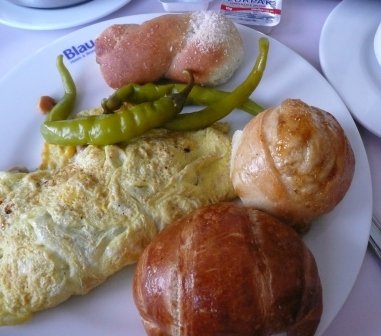 Breakfast made to order at the hotel

The brightly displayed buffets at our hotel offered items found on buffets across North America. Fish, chicken, and pork. Vegetables and starches. Pizza. Platters overflowed with papaya, guava, mango, bananas, and watermelon. Some days there was less variety in fruit and vegetables because hoteliers are at the mercy of their suppliers. For breakfast, eggs, pancakes, and French toast were cooked to order.

It was bizarre to see guests reach into their pockets and purses for condiments and seasoning salts.

Hermano with his taxi

We rented a taxi, a replica of a 1927 Ford Convertible, for a drive to nearby Cárdenas. With Hermano at the wheel and the wind in our hair, we felt like movie stars. We waved at people and yelled “Hola” and everyone yelled “Hola” back. 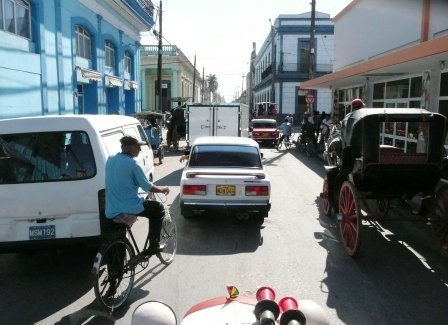 A mixed bag of vehicles in the streets of Cardenas 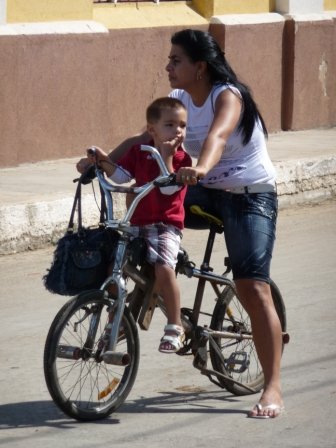 Sharing the street in Cardenas 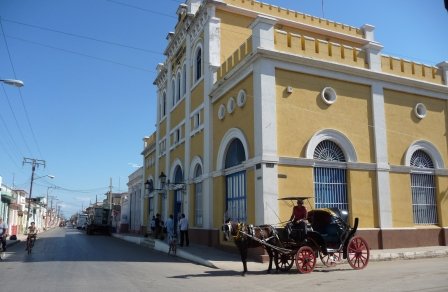 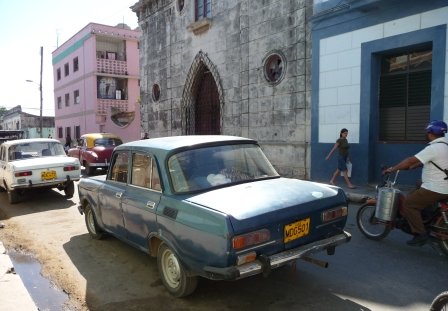 Old Ladas in the streets of Cardenas

When we purchased a postage stamp, the clerk turned the stamp over and squeezed a glue bottle over it before placing it in position on our postcard.

Not being the types to sit around a pool for a week, we booked an overnight tour to Havana. En route to the capital city, at what looked like bus stops, people stood haphazardly in lines along the roadside. Men in bright yellow outfits haled passing cars as though they were taxis. Some pulled over some did not. We were told that certain vehicles were exempt from picking up passengers. The traffic officers in yellow knew which ones to wave at by the color of their licence plates. If the officers waved and there was an empty seat in a car, the driver had no choice but to stop. People had to get to work.

A well worn footpath meandered alongside the highway. People walked it, rode bicycles along it, and tethered cattle beside it. Every house, no matter what size or condition, whether decrepit thatch or solid cement, had a chair or two sitting out on the front verandah. 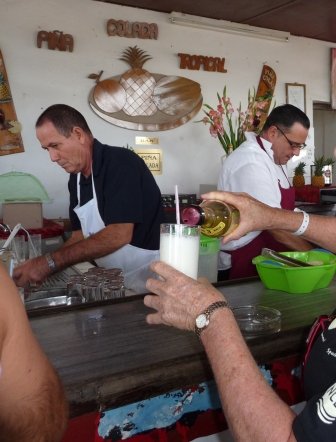 Pay for the pineapple juice and free pour the rum

Part way to Havana, our bus stopped for a Pina Colada break. Stepping up to the roadside bar, we paid for pineapple juice in a tall glass then we were handed a bottle of rum to top it up, ourselves, for free. 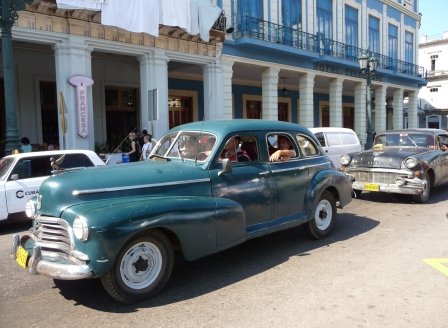 The cars in Havana are vintage. The very sight of them is sweet. 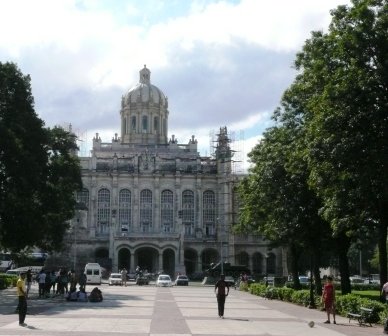 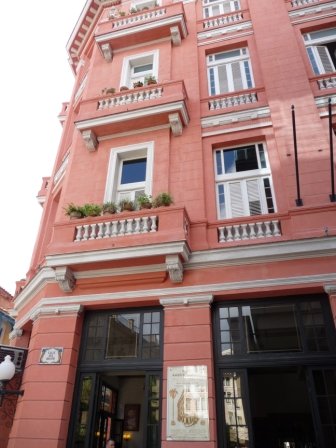 We wandered Parque Central the epicenter of Habana Vieja, Old Havana. Men with beards lounged on public benches. We thought, more than once, that we had spotted Fidel. Horses stood under shade trees around the square, with their carriages, waiting for their drivers to entice interested tourists. 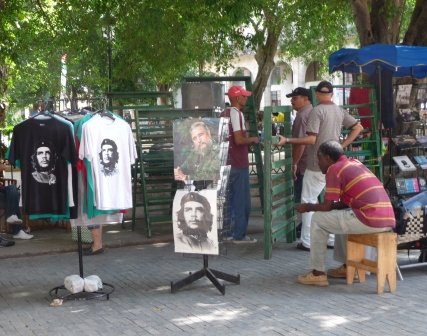 There are few public photos or images of Fidel Castro anywhere. No murals or graffiti depicting anyone but Ché Guevara, and his image was mostly on t-shirts. The Plaza de la Revolucion where Fidel held massive political rallies was now vacant, broken concrete with grass and weeds growing between the cracks. We were told that Raul Castro does not make speeches. 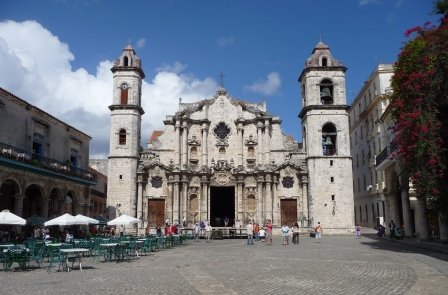 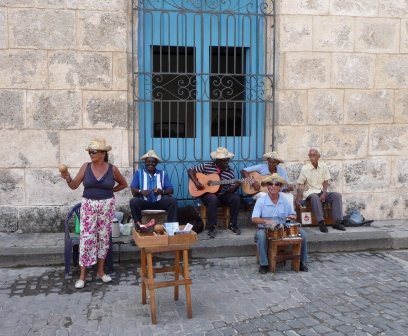 Musicians in the plaza 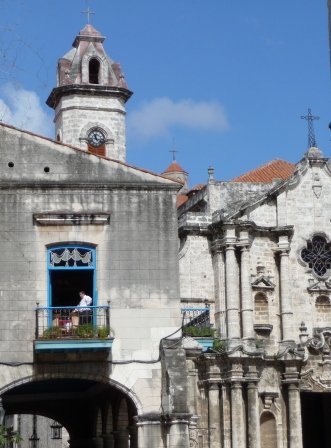 In Plaza del Cristo we handed out hundreds of pens and pencils that we had brought with us, to children in school uniforms. Adults appreciated them, too. An elderly woman approached us asking for soap. 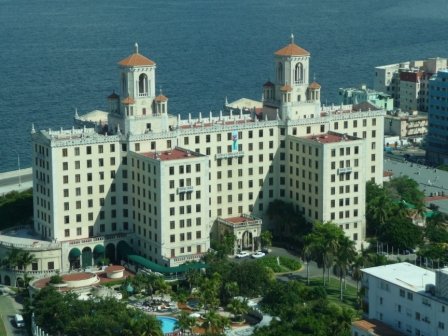 Our accommodations in Havana were at the Hotel Nacional, the oldest landmark hotel in the city. Walking around marble columns, stepping on ornate Moorish-influenced tiles, we lingered in the lobby to appreciate the architecture. 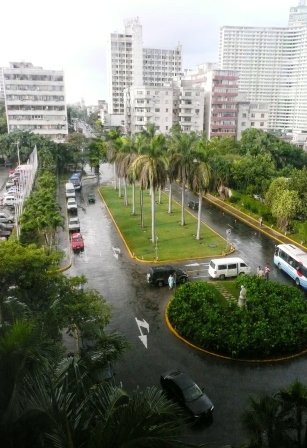 View from our window at the Hotel Nacional

Upstairs our room was minimally furnished with high ceilings and tall windows with wooden shutters. 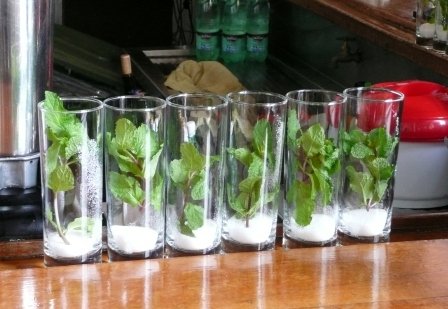 Mojito setups at the bar on the terrace

Highball glasses set up with mint leaves and sugar waited for us at the bar on the terrace. The bartender muddled the leaves, releasing their aroma and flavor. He squeezed fresh lime juice into the glass, dropped the lime wedge into the mixture, added ice, poured rum over the ice, and topped up the glass with soda water. After a good stir, he added a straw and a sprig of mint for garnish. Mojitos at their best.

A breeze through the trees and onto the terrace

We sat in high-backed dark wicker chairs, typical of Humphrey Bogart movies of the 40s. We looked out to the water and sloping gardens, catching faint murmurs of conversation. A light breeze rustled through the palm trees as a quartet began to play. We had no doubt that at some time Ernest Hemingway had sat there, too.

Famous people at the Hotel Nacional in the 50s

A photo gallery in the hotel bar affirmed the famous and infamous who had stayed at the hotel through the decades. Gary Cooper, Errol Flynn in the 30s. George Raft, Betty Grable in the 40s. Marlon Brando, Mickey Mantle, Walt Disney in the 50s. 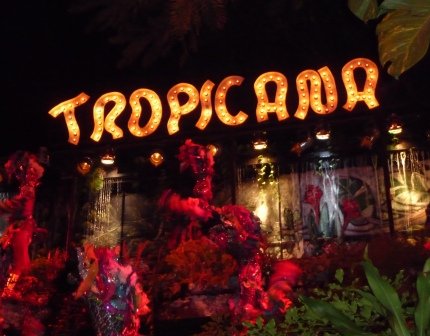 That night we attended the Tropicana Club, the glitzy tourist attraction established in 1939.

The next day we returned to Parque Central and hired Leonardo and his horse and carriage to tour us around Havana. We explained to him that we had little time, we soon had to catch our bus back to our hotel in Valadero. Holding the reins, Leonardo turned in his seat over the horse’s rump, and said, “Do you want to see the real Cuba?” 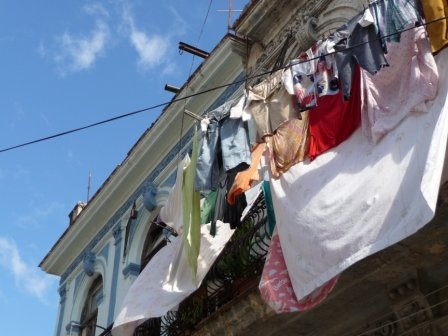 The practicality of daily living

Away from the tourist areas

Within minutes the horses hooves were clip clopping along streets lined with two and three story deteriorating buildings. People waved at us from doorways. We waved back. Snippets of music came out from corner bars. 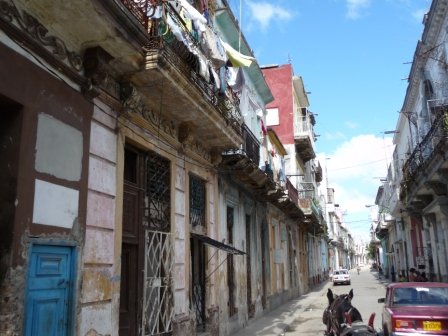 We moved closer together on the carriage seat when we saw overhead balconies that could obviously crumble and fall at any moment. Electrical wires hung carelessly. We were the only tourists on the streets.

Leonardo reined his horse to a stop and asked if we would like to meet his aunt. As soon as we said yes, he turned his horse, pulled up to a building, and helped us out of the carriage. We climbed a very narrow staircase to a third floor that opened up to an apartment. Without speaking English, Leonardo’s aunt greeted us, offered us mango slushies from her blender, and motioned us to step into her screened sunroom that through various tropical plants offered a view of the street below. 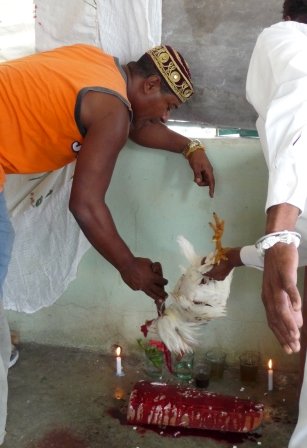 The first thing we saw was a white rooster with a butcher knife through its neck. Two men were hovering over it. One, perfectly pressed all in white, was holding the rooster by the legs. Blood trickled down onto a cement block on the floor. Two small candles flickered beside it. A small shot glass held some sort of liquid. Another glass held a flower. The second man leaned in toward the chicken with his hand on the handle of the knife. A third, younger man, shirtless in jeans and blue sneakers, was chanting.

As we watched feathers being plucked from the chicken and scattered over the blood on the floor, a teenage girl sat at a nearby table talking on her cell phone.

The chanting stopped. The young man was given a chalk-like substance that he rubbed between his hands and tossed into the air around his face and shoulders. When he was finished, the substance was offered first to Leonardo’s aunt and to us. Without hesitation, we set down our cold drinks and took turns stepping forward , following Leonardo’s aunt’s lead. Before we left, we were invited to dinner. We regrettably had to decline. Our bus was waiting.

While our fellow tour bus passengers were shopping and eating, we had taken part in a religious ceremony. We learned later that a large part of the Cuban population is superstitious.

Santerian dressed in white after initiation

Even devout Catholics in Cuba believe in Santeria and will have ritual cleansings performed to hedge their bets in times of need. Santerians, or saint worshippers, dress all in white after going through their initiation rites. 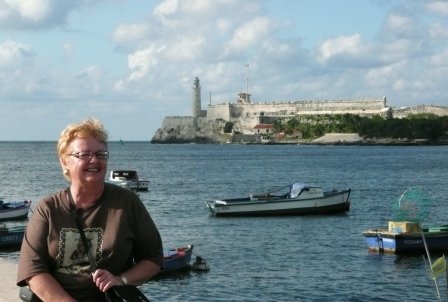 Phyllis along the promenade in Havana

We learned more about Cuba by leaving the luxury beach hotel and going on an adventure to Havana. Even more importantly, we confirmed that Cubans are friendly and hospitable. They are proud of their country and want to show it off. Without meeting Leonardo, feeling safe in his company, our Cuban experience would not have been complete.