Take A Bite Out Of Halifax Nova Scotia 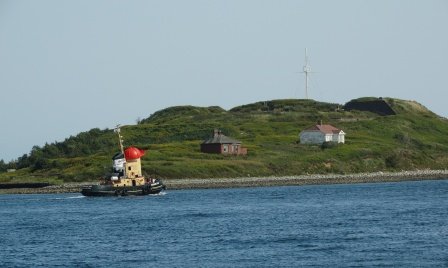 Our IFWTWA group of writers walked almost the entire 3.8 kilometers of the Halifax Waterfront Boardwalk before our Take A Bite Out Of Halifax walking tour began. It was a hot, sunny day, not the kind of chilly weather that visitors to Canada expect to experience at the end of August.

As we strode along, personal watercraft and sailboats bobbed in the water, a tug boat crisscrossed the harbor.

A sailing vessel heading out to sea

Halifax is a navy town

Statues reminded us of the naval history of the city. We stepped up our pace to the rhythms of a woman playing the spoons on her knee like castanets and a young girl playing the fiddle.

Turning away from the waterfront, we followed our guide uphill, almost to the citadel.

Our first food bite, at Gio Restaurant, was worth the climb. Delicate bite-size green onion pancake with crunchy pork belly and kimchee. Gio’s Chef John House is known for his creativity, especially with his lobster dishes and octopus bacon.

With taste buds tantalized, we continued our culinary descent back to the waterfront. At The Five Fishermen, Chef Rohid prepared shrimp in a Thai curry spiced coconut milk and presented them over pureed parsnip. Chef Rohid had only one bite-size opportunity to impress us and he did.

The Five Fishermen Restaurant, owned by three fishermen and two farmers, serves up history in addition to good flavors. The building, loaded with stained glass windows and wooden beams, was originally a schoolhouse, the first public school in Canada. Later it became an art school owned by Anna Leonowens who, prior to her arrival in Halifax, was governess to the children of the King of Siam, the heroine of The King and I. When Anna moved on, the building became a funeral home that serviced two historical events: the sinking of the Titanic in 1912 and the devastating Halifax Explosion in 1917. When asked, employees at the restaurant share their paranormal experiences of prankish children tugging at their aprons. Seventeen spirits, of the celestial kind, make appearances in the elevator shaft that is now the restaurant’s wine cellar.

The old beside the new

We walked by old buildings and new construction, past a historic military parade ground surrounded by high rises built according to height restrictions to protect the view from the citadel to the harbor.

The argyle pattern on Argyle Street

We paused briefly at The World Tea House in the midst of the pedestrian-friendly entertainment district on Argyle Street where the pavement is transformed with blue, white, and green colors in an argyle pattern.

Proprietor Phil Holmans is passionate about the pleasures of a cup of tea. His refreshing raspberry infusion was just what we needed between our taste bites of the city.

Around the corner, on Barrington Street, we dropped in to the Mezza Lebanese Kitchen that has won the city’s Best Shawarma Award eight years in a row. More than a bite, our sampling was a generous shawarma – marinated, rotisseried chicken with a hint of roasted garlic, in a wrap.

Leaving Mezza, we appreciated that we were walking and not being driven, not only because we could pause and take in the vistas of Halifax but to work up an appetite for the next stop.

At Chives Canadian Bistro, the owners work with fishermen and farmers to present the tastes of each season. Our black bean burgers were so good we asked for the ingredients: feta, cashews, black beans, tomatoes, savory slaw, cider vinegar, poblano peppers, and chipotle mayo.

With a welcome breeze, we arrived back at the waterfront just in time for something sweet. Double smoked bacon and pecan brittle with Nova Scotia sea salt and a white chocolate bar with chai spices at the Sugah Confectionary and Ice Cream Emporium. The sweet, salty, spicy flavors return just thinking about it.

Sweet things down on the harbourfront

Our final stop was Fox Hill Cheese House at the Halifax Seaport Farmers’ Market. Not only does this company make over 20 varieties of cheese using milk from their Holstein cows, it produces homemade gelato, the perfect ending to our tour.

With tastings from pork belly and kimchee to Italian ice cream, we caught the flavors of Halifax, a city with a historic past and an appetizing future.