The Bacon and Ale Trail in Stratford 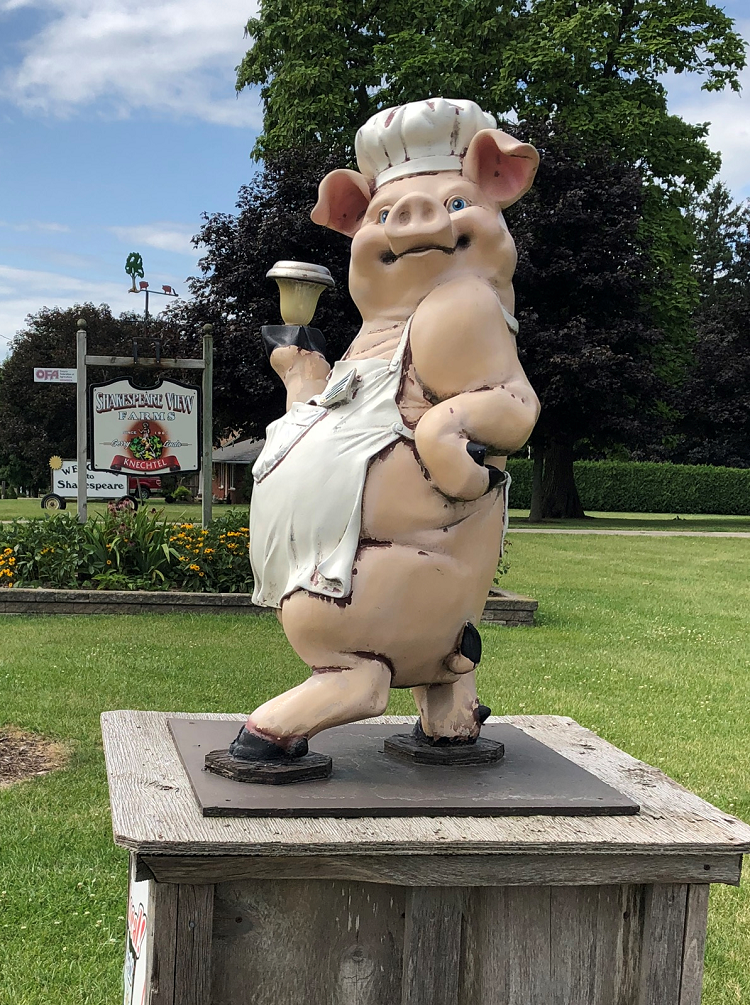 The Bacon and Ale Trail in Stratford, Ontario, is a year-round adventure filled with bacon and ale-inspired experiences at food outlets, gift shops, breweries and pubs. Pork producers are high among the agricultural successes in Stratford’s surrounding Perth County and brewing beer has been happening in Stratford since the 1870s. By purchasing Bacon and Ale Trail vouchers, you get to visit outlets along the trail and exchange your vouchers for the special offerings at each location. 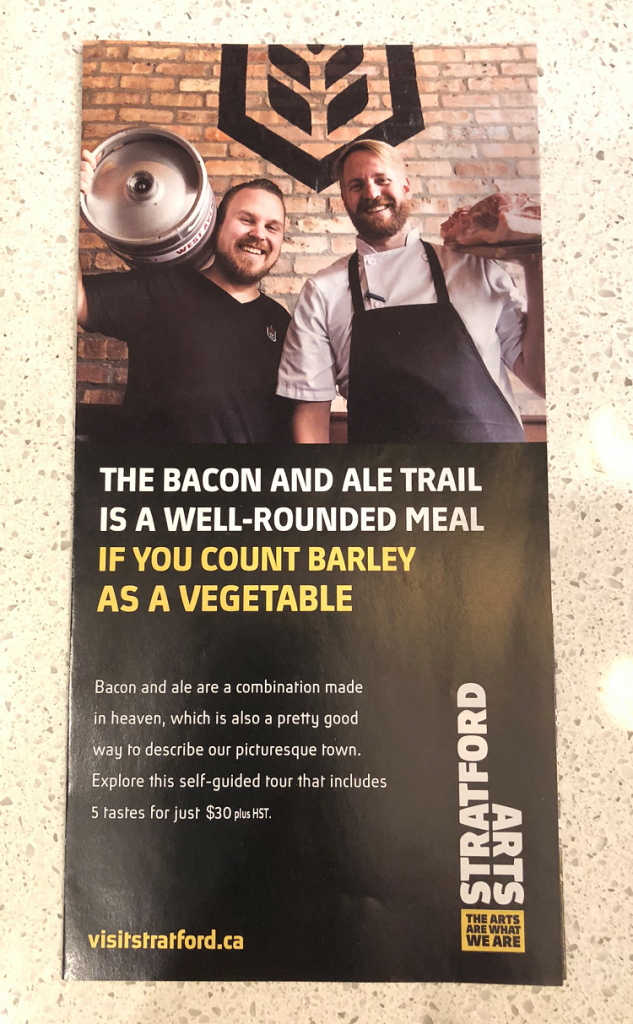 The Bacon & Ale Trail vouchers allow the adventure to spread over a week. After studying the list of stops along the trail we thought, hmmm, we could focus on food or we could focus on ale, or better yet, mix it up a little. Mixing it up was the answer. We decided to start with the locations outside of downtown Stratford.

Our Day on The Bacon and Ale Trail 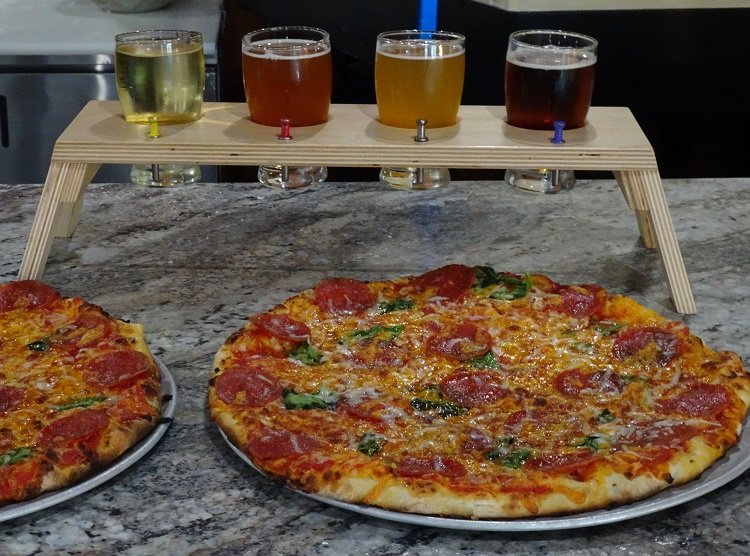 Wood fired pizza and our flight at Jobsite Brewing

Our first stop on our way out of town was Jobsite Brewing, south of the city centre. We shared their voucher offering of a flight of four beer samples. Because it was noon, we combined our flight with one of their wood fired 10” pizzas. 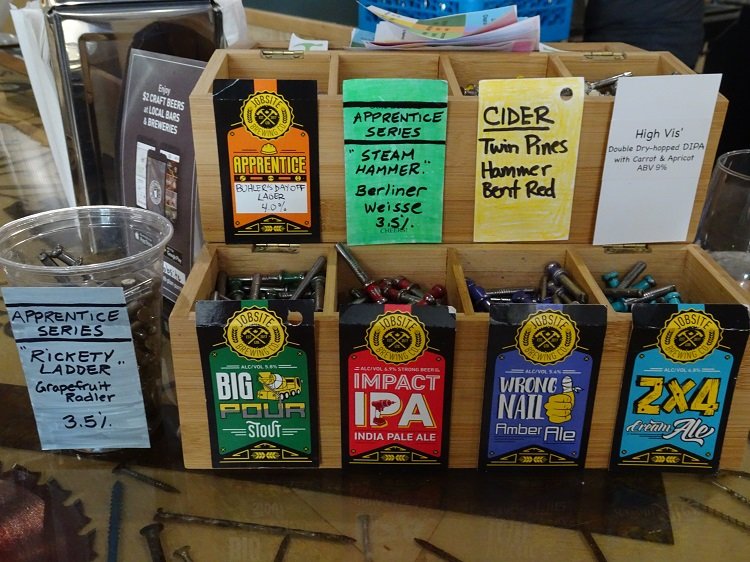 For the flight we chose four out of the nine available beers on tap with names appropriately reflecting a construction site: 2X4, Wrong Nail, Rickety Ladder Grapefruit Radler, and Steam Hammer Berliner Weisse.

After a fifteen-minute drive through the countryside to the outskirts of St. Marys we pulled into McCully’s Hill Farm 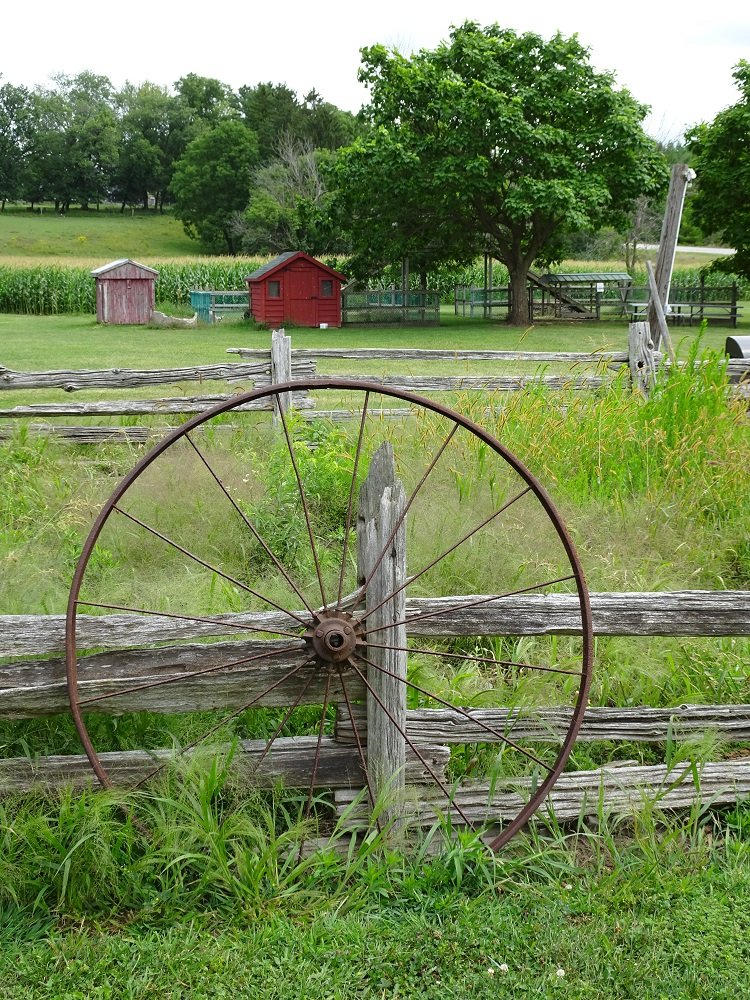 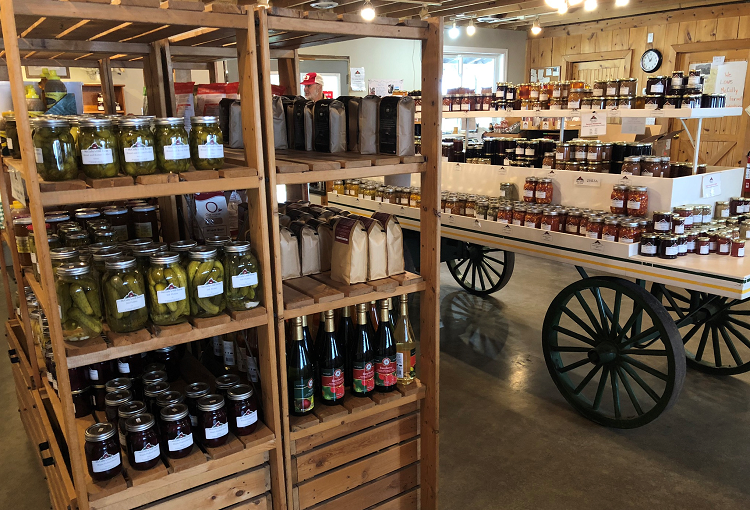 McCully’s Hill Farm is a family destination for seasonal farm festivals, maple products, meats, homemade baking, fresh produce and preserves. We watched pies being prepared for the oven then traded a voucher for a pound of McCully’s farm-raised bacon.

A few more minutes down the road in St. Marys, the Village Craft and Candle infuses bacon and ale in their trail offering of Campfire Bacon & Citrus Ale candles.

We then circled to Shakespeare, on the east side of Stratford, and a stop at The Best Little Pork Shoppe. 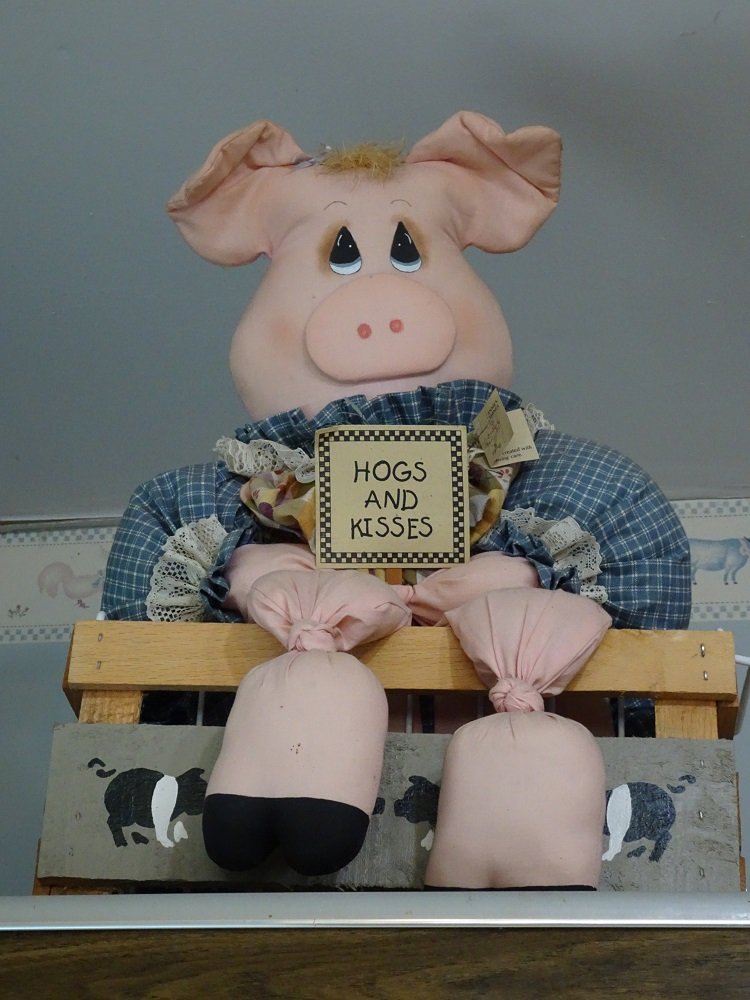 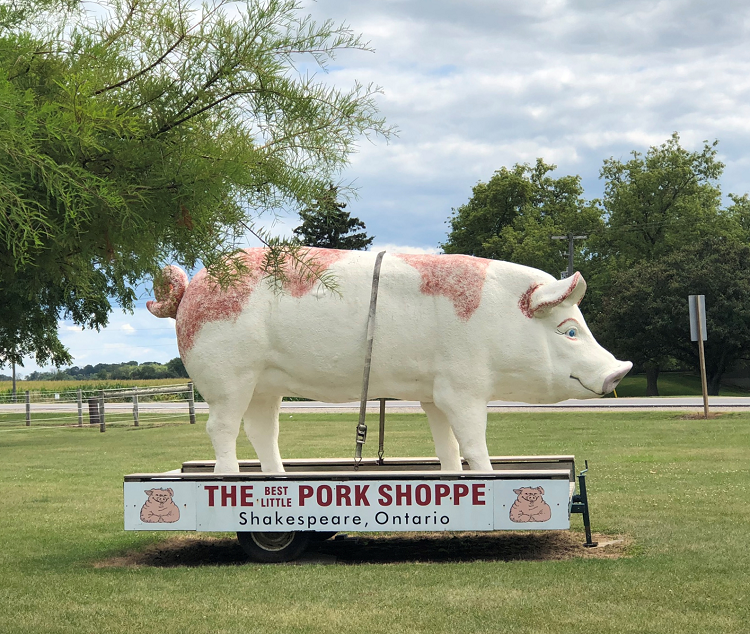 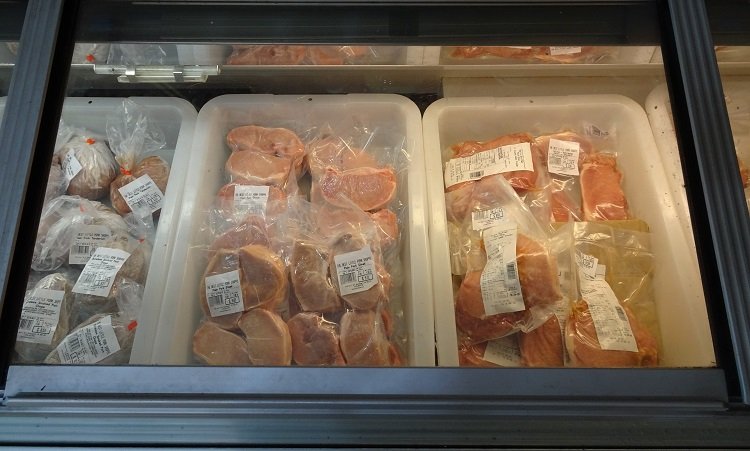 The Best Little Pork Shoppe is the place for pork, as well as chicken and turkey items, supplied by local producers. We drove away with four bacon burgers and a package of pork chops purchased with a discount because we were on the Bacon and Ale Trail.

Our next stop, the Shakespeare Brewing Company, was practically right next door. 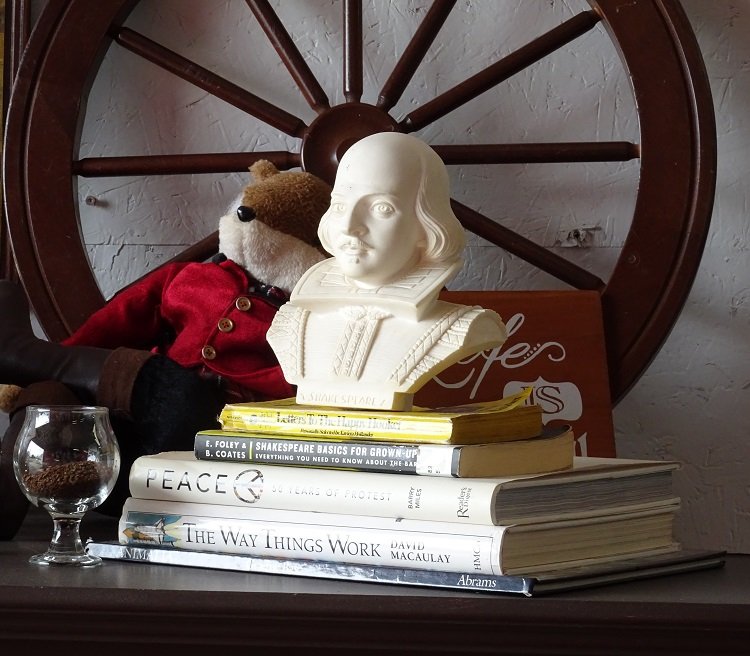 Honouring The Bard at the Shakespeare Brewing Company 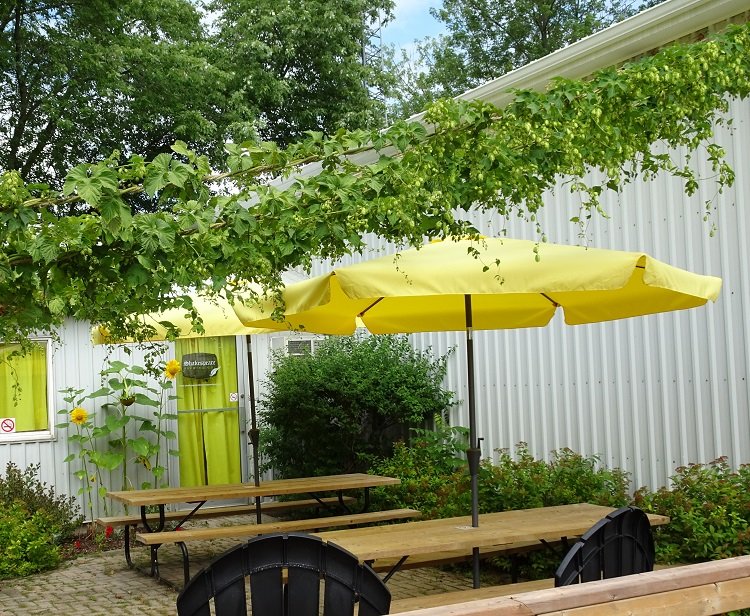 Shaded by hops on the Shakespeare Brewing Company patio 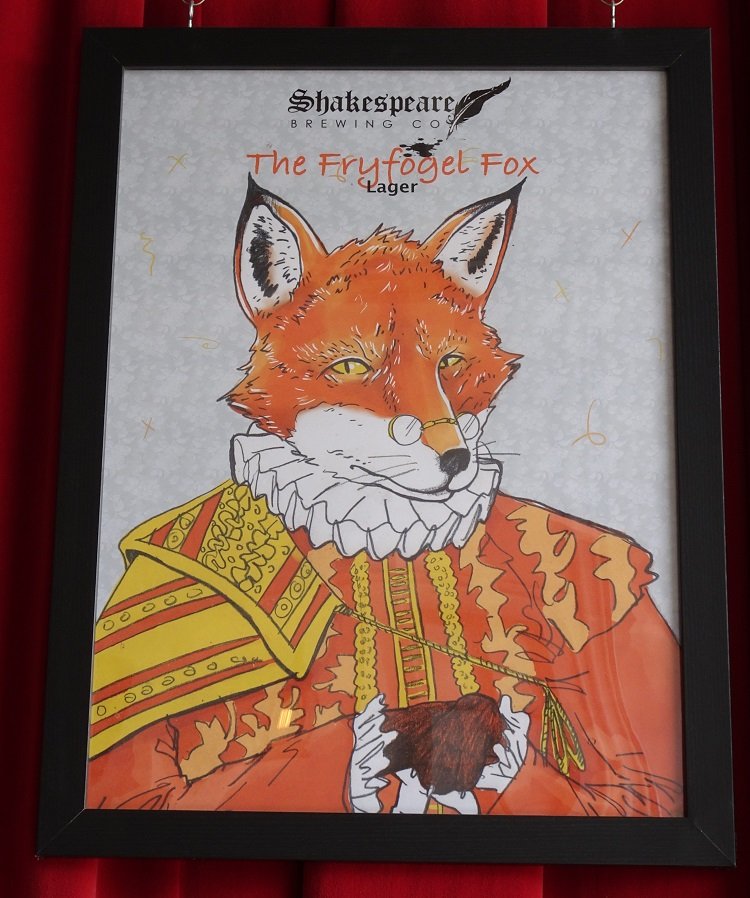 The nearby Fryfogel Inn, built in 1845, is now a museum

The Shakespeare Brewing Company offered a flight of their small batch seasonal beers to be enjoyed outside on the patio, beneath hop vines, or inside, in lounge chairs, in their converted school bus garage.

Winding our way back toward Stratford, we visited Black Angus Bakery & Catering. 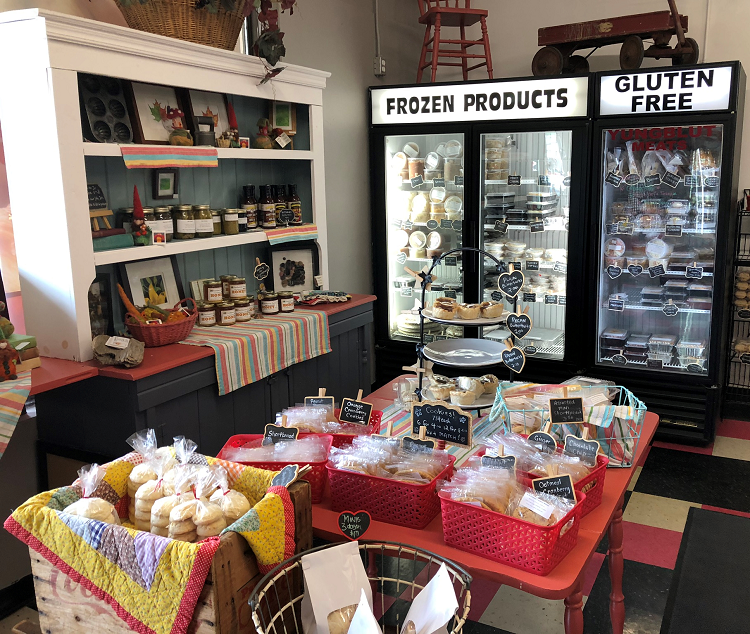 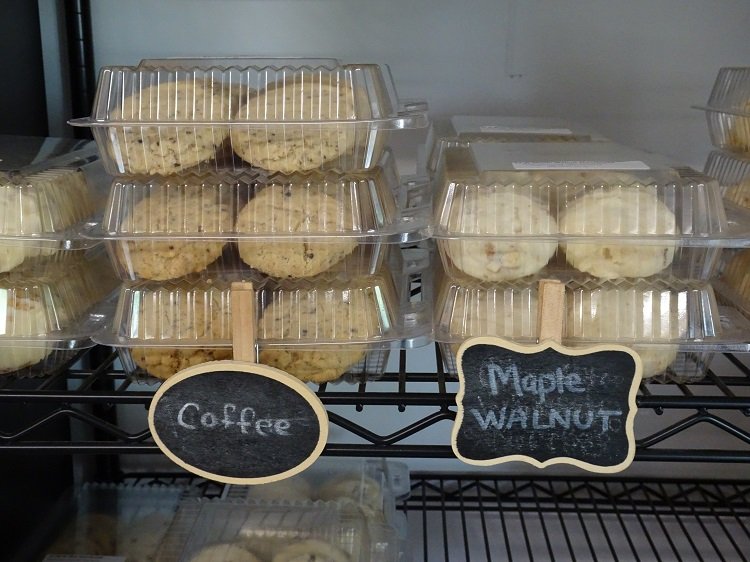 At Black Angus Bakery & Catering we received a dozen Bacon Shortbread cookies, one of the twenty varieties they offer their customers.

Our next destination, on the west side of town, was Madelyn’s Diner, the home of award-winning butter tarts. 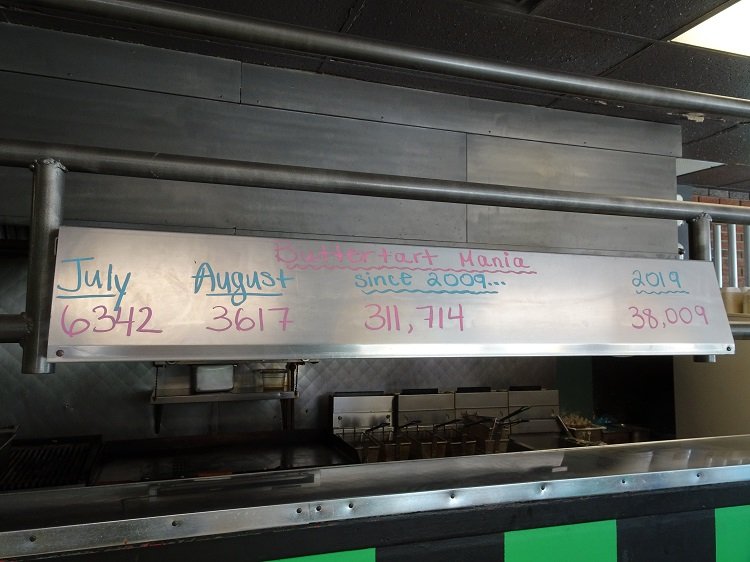 Statistics on the popularity of Madelyn’s butter tarts 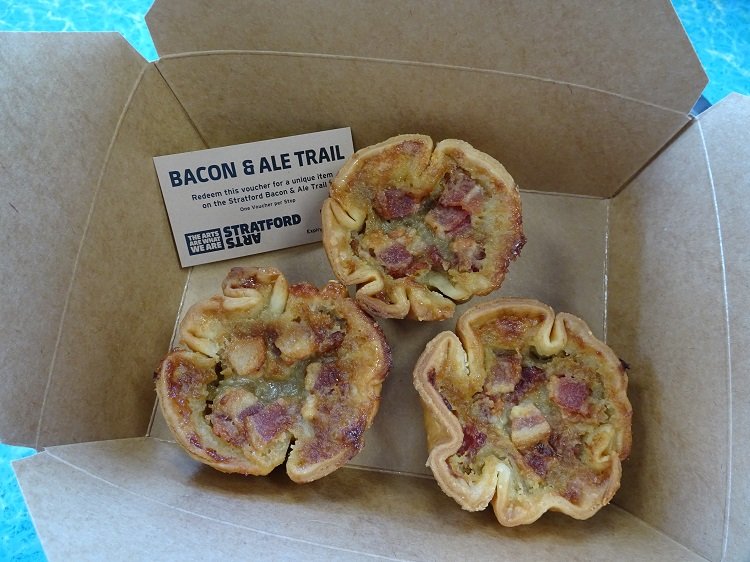 Each voucher exchanged at Madelyn’s provided one half-pound Bacon Butter Tart and a cup of coffee.

Our last stop for the day was at Soup Surreal where we could choose one of each or two of their selected frozen soups. 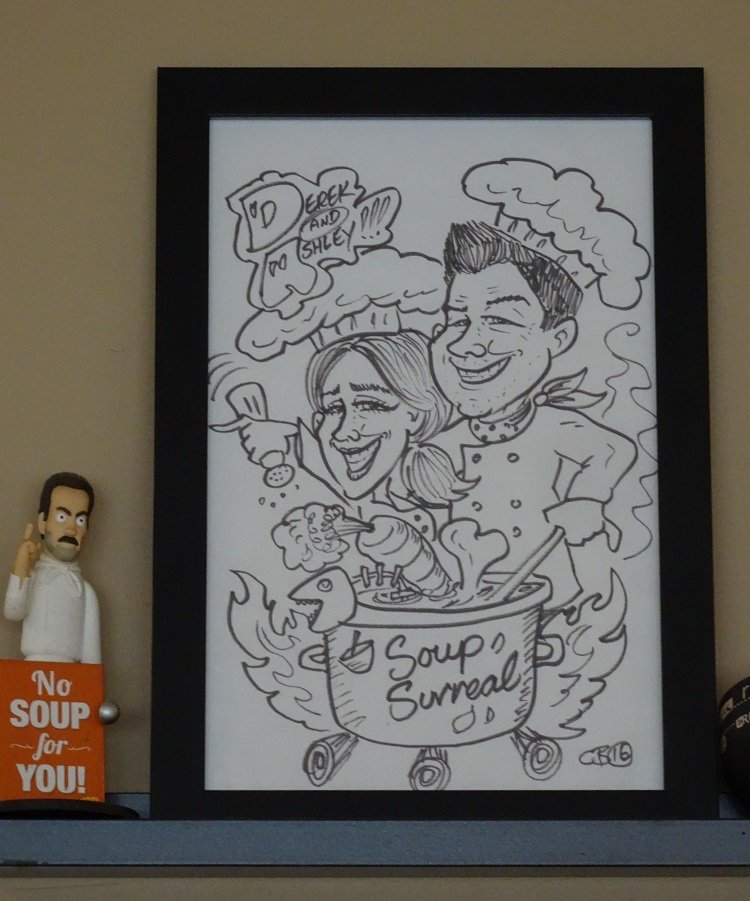 Soup Surreal with a touch of Seinfeld 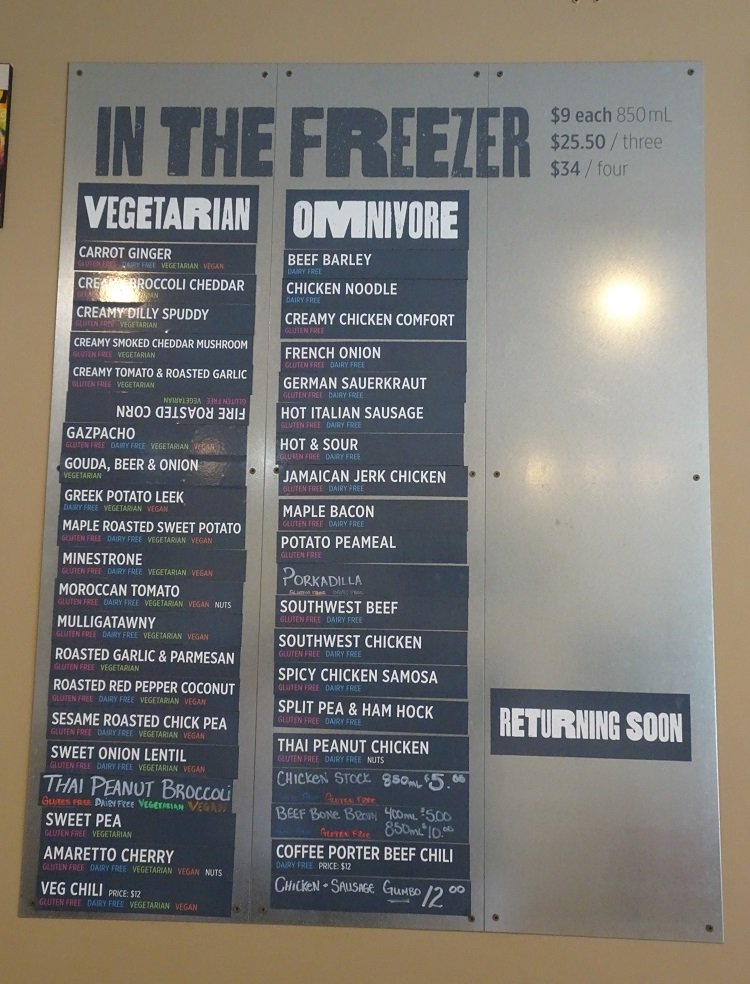 So many choices at Soup Surreal

At Soup Surreal we chose one of each soup available to us, taking both Gouda, Beer, and Onion and Maple Bacon back to the test kitchen and putting them in the freezer. A few days later, they were perfect with focaccia bread and a salad. 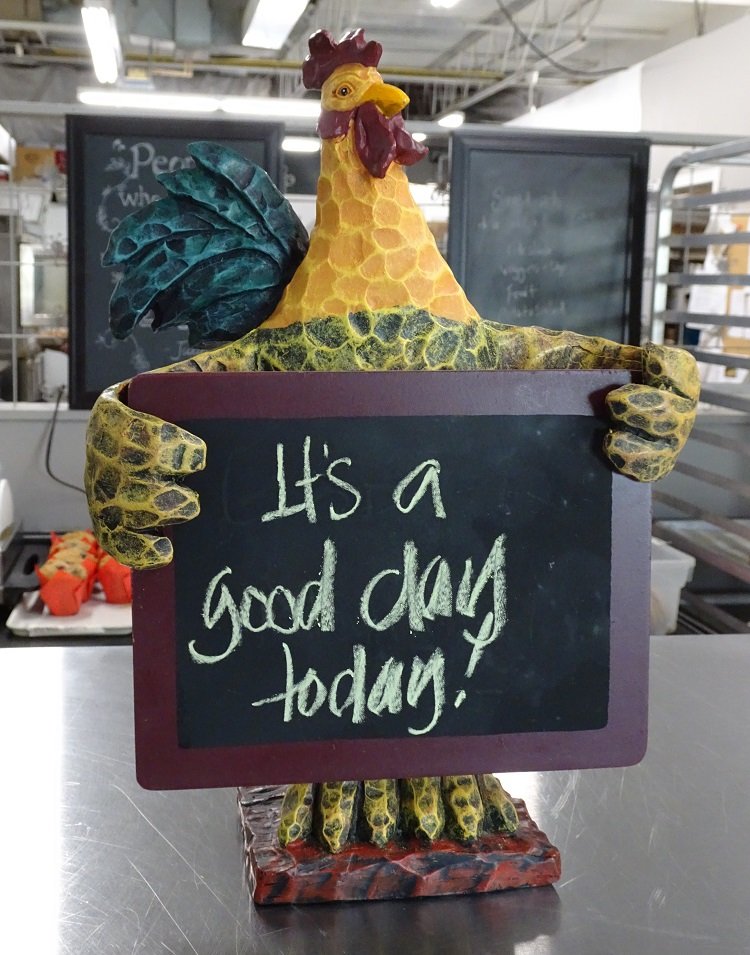 The Black Angus Bakery & Catering rooster is right. It was a good day.

The bonus with the Bacon and Ale Trail in Stratford is that the bacon and ale-influenced offerings enticed us into shops that we had not visited before, opening our eyes to the varied products that Stratford and area merchants are offering. Who knew that Madelyn’s famous butter tarts included a half-pound version with bacon? That Jobsite Brewing turned a pub visit into a construction site or Soup Surreal created so many flavours of soup?

Even though it was August when we drove the trail, as we unloaded our bags of cookies, bacon, beer, pork chops, butter tarts, burgers, and soup from the car, it felt Halloween-like, as though we had been trick or treating, except there were no tricks, just treats!

Next Time on the Bacon and Ale Trail – Walking Downtown

For our next Bacon and Ale Trail adventure we won’t need the car, we will walk around downtown Stratford where each stop on the trail is only minutes from the others. We will take in a mini flight of four seasonal craft beers at Black Swan Brewing Co., a bar snack topped with onion bacon marmalade and a half pint of Creemore Springs craft beer at Boar’s Head Pub, two large Sea Salt Caramel Bacon or Dark Chocolate Porter cupcakes at Kandy Cakes, a comparison tasting of two styles of artisan bacon paired with craft beer at Mercer Beer Hall and Kitchen, bacon layered in toffee and creamy milk chocolate at Rocky Mountain Chocolate, and pick up beer soap and a BeerMo bottle moustache at Treasures. 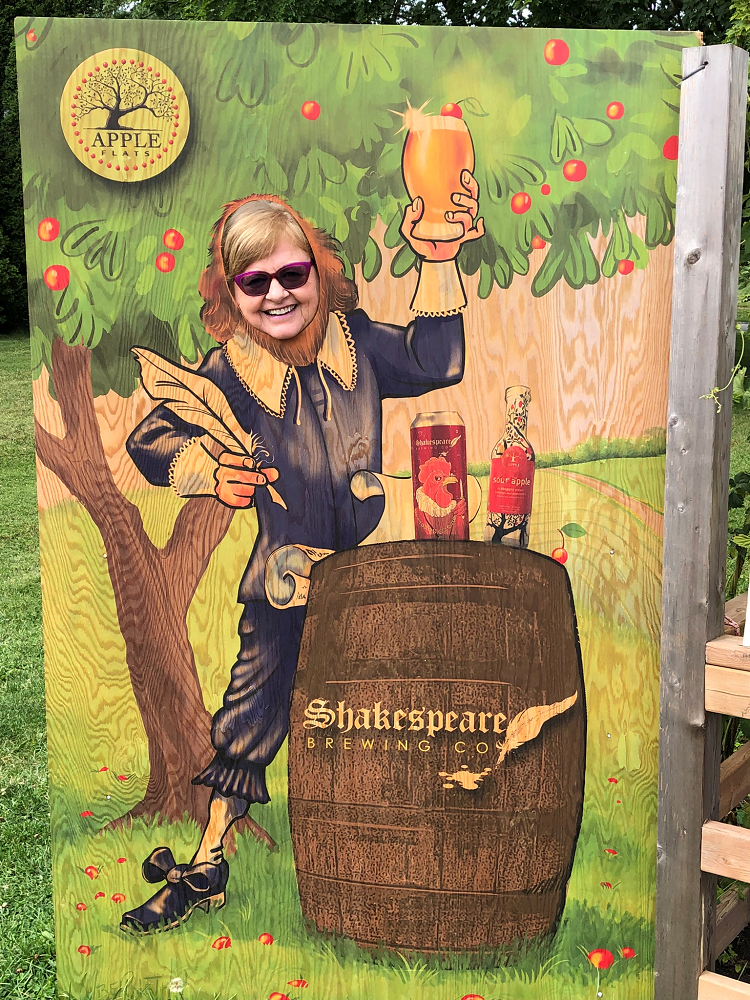 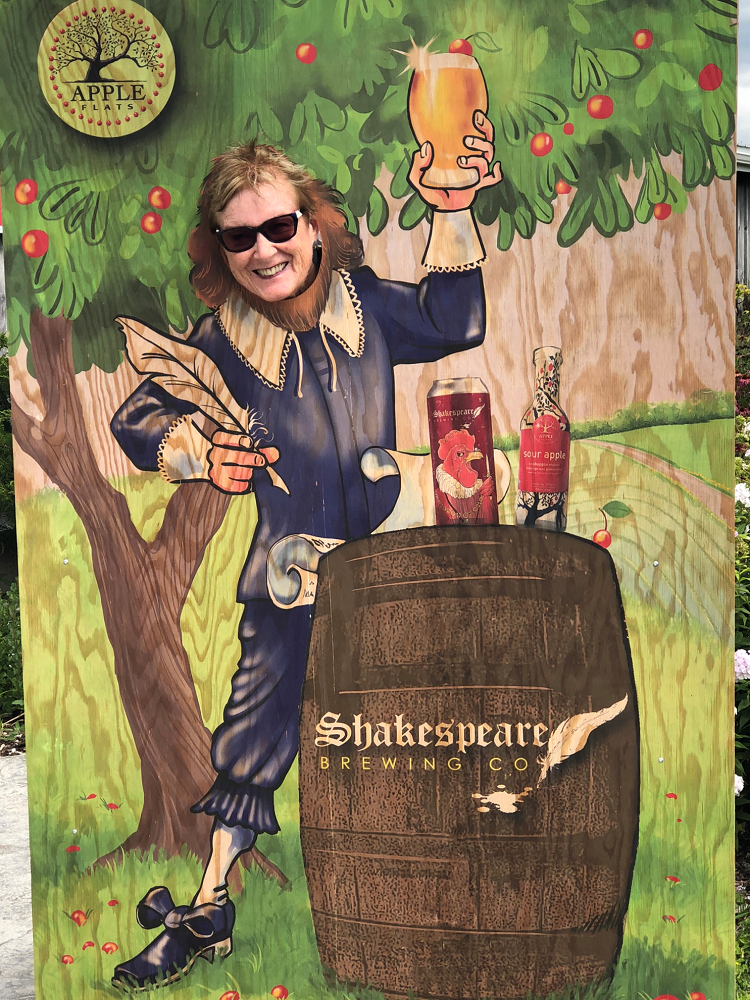 Whether driving or walking, focusing on food, beer, or unique bacon and ale-infused products along the Bacon and Ale Trail is a fun adventure.

You can obtain the Bacon and Ale Trail brochure and personally purchase vouchers at Stratford Tourism, 47 Downie Street, or download them online at https://visitstratford.ca/stratford-bacon-and-ale-trail.

The Cooking Ladies would like to thank Stratford Tourism for this experience.

For our other Stratford adventures check out:

Making Tiaras at Stratford’s Off The Wall

Dark Beer and Stinky Cheese at The Milky Whey