The Cooking Ladies Are In Cookbook Quarantine At The Test Kitchen 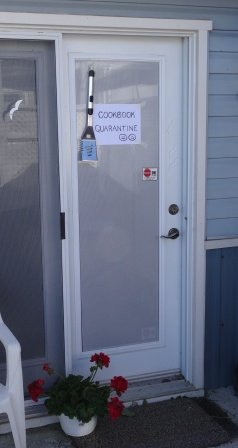 Wondering what we mean by cookbook quarantine? It’s not as bad as it sounds. Yes, we have a deadline with our publisher and the days are flying by faster than usual so we can’t leave the Test Kitchen, but, the aromas coming from the barbecues are intoxicating. And, after the photos are taken and the recipes finalized, we eat our creations. That’s the best part.

The beginning of this journey into cookbook quarantine began last December when we signed a contract with Whitecap Books to produce a grilling cookbook that includes stories of our adventures on the road.

In December, when we set out on our road trip to the southwestern United States to conduct research for the book, the July 2015 deadline seemed far in the future. However, in January, a tour bus rolled over with us on board. This mishap raised a roadblock to our creativity, setting us back several months with neither cooking nor writing as our priorities.

Traeger Lil’ Tex Pro pops out of its box

They came in boxes, unassembled. With assistance from a neighbor, there were no parts left over.

Barbecue tools of a different kind

We filled our propane tanks and bought bags of wood pellets. We squeezed an extra worktable into the Test Kitchen for the paperwork. We updated computers, replaced printer cartridges, charged camera batteries, cleaned camera lenses, tested lighting, set out display dishes, and compiled a list of garnishes.

We spent time outside in the garden, chatting with the herbs, encouraging them to grow.

Thyme is beginning to blossom

It is a good year for basil

Once a week, we grocery shop and pick up our meat order at Schinkel’s Gourmet Meats in Chatham.

Before we fire up the grills, we create recipes on paper. We chop, dice, slice, and measure ingredients. We mix marinades and combine herbs and spices into rubs. We check the weather.

We preheat the Napoleon on high and oil the grate.

We fill the hopper on the Traeger with pellets and turn the dial to smoke.

We place the meat on the grates and set the timers.

We mop, baste, and turn, recording every detail for recipe accuracy.

A full rack of side ribs on the smoker

Apple Marinated Back Ribs on the grill

The Cooking Ladies doing what they do

When the instant-read thermometer or the meat probe tells us it’s time, we transfer the meat to the Test Kitchen counter and the moment of recipe truth arrives. How well will it photograph? Is the flavor spectacular?

The aromas of the grill and smoker linger as we scrutinize every detail through the camera lenses.

We take photo after photo until we feel we have properly captured a tantalizing image.

We transfer the pictures from the cameras to the computer. After the recipe passes the visual test it faces the taste test.

As we taste and tweak our recipes, we reminisce about some of our recent barbecue experiences in the United States. Mansmiths in Hollister, California. B.B. Kings in Memphis, Tennessee. Lawler’s and Big Bob Gibson’s in North Alabama. The Shed in Southern Mississippi. Sugarfire Smoke House in St. Louis, Missouri.