We Could Live In These Shops In Boston’s Little Italy 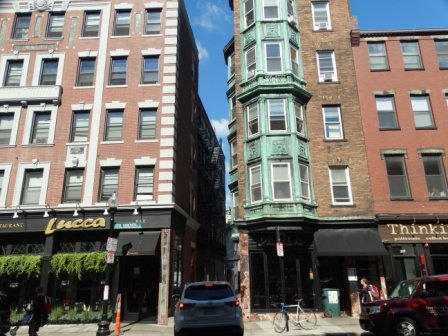 Michele Topor of Boston Food Tours invited a group of us to experience her community – Little Italy in Boston’s North End. She directed us off the busy tourist path to the authentic Italian food shops that she visits on a daily basis.

The community maintains its old world look. Plants hang from the balconies of five-storey, red brick, walk-up condominiums. There is no such thing as a supermarket in this neighborhood.

The home of American revolutionaries

Just beyond a sign pointing to Paul Revere’s House in what was Boston’s first neighborhood, a taxi driver gestured with his arms in an attempt to cajole pedestrians back onto the sidewalk from the middle of the narrow street. We followed Michele single file down a narrow alleyway. “Don’t judge a book by its cover,” she said.

The Bricco Salumeria and Pasta Shop is small but loaded with aromas – of cured meats, cheeses, tomatoes, marinated and cured olives, olive oils, and vinegars.

A wall of sausages

With lunch hour customers jostling to order freshly made sandwiches, our group circled around a large bowl of fresh mozzarella and Michele explained that rather than be praised for creaminess, which means the cheese is too old, good mozzarella should squeak when sliced. Little drops of white should appear as the knife cuts.

We sampled quality olive oils that brought a cough to the back of our throats just as olive oil should, and balsamic vinegars from the only two areas in Italy that produce real Balsamic Vinegar. Sipped from a tasting spoon, the balsamics were as smooth and sweet as wine.

Across the alleyway, and down a staircase, we stepped into Bricco Panetteria, a one room, white tiled, flour-dusted, old-world bakery.

State of the art proofers and ovens, in very tight quarters, produce artisan bread made only with natural ingredients.

Fresh from the oven

Meat, cheese, bread, all in one

The home of the Best Cannoli

Michele warned us, before entering, that Maria’s Pastry Shop “is not overly welcoming, not pretty, but it doesn’t matter.” On the 40th anniversary of Boston Magazine, Maria’s was recognized for quality, excellence, and The Best Cannoli.

A sign on the bakery wall says “You call it chaos we call it family” and another, closer to the ovens, says “Do you want to talk to the man in charge or to the woman who knows what is going on.” Maria’s mother worked in the bakery shop for 42 years; Maria has owned it for 32.

The many regions of Italy

A baker’s work of art

Maria’s biscotti is crunchy with a hint of cinnamon, her macaroons are colorful and chewy, and her marzipan is light and full of flavor. Maria is so up-front with her customers that she displays the few cookies she sells in her shop that are not made in her ovens in their original manufacturers’ boxes. There is no chance of mistaking them for hers. Maria’s cannoli are the best.

Polcari’s Coffee on the corner of Salem and Parmenter is not a Starbuck’s. It is the place to go for roasted coffee beans, wild oregano, dried herbs and spices, dried legumes, flour, rice and hard to find items like Fior Di Sicilia pure extract, pomegranate molasses, grey salt, and preserved lemons.

In the summer months, granita di limone or lemon slush is a big seller.

At nearby Alba Produce, a small green grocer, produce is un-priced. No one but the vendor is allowed to touch the vegetables.

Using every inch of space to display produce

If customers do not like what he picks they are encouraged to point to the item they prefer.

Michele brings Alba’s produce to us

On the sidewalk, leaning against parked cars, in the Boston afternoon sun, we ate prickly pear, ingested the natural, rich sweetness of the figs, and crunched on slices of fresh fennel.

Over 100 years on the corner

Our last stop in Little Italy was Cirace’s, Purveyors of Fine Wine and Spirits, on the corner of Richmond and North.

Traditionally, Italians enjoy specific drinks at specific times of the day. Aperitivo for mid-afternoon visiting with friends, still and sparkling wines to accompany meals, and digestivo after meals, to relax. Cirace’s has it all.

Because most Italian food found in North American grocery stores is far from authentic, it is important to visit places like Boston’s Little Italy. To re-visit the flavors, textures, and aromas of the healthy Mediterranean diet.

There are messages in a cuisine that considers pasta sauce a delicate condiment to pasta, in a country where men are known to carry a vial of balsamic vinegar in their breast pockets.